lunaticg 9:04:00 AM
A news by Mainichi reported that Japan Mint will release a memorial coin to honor of samurai Ryoma Sakamoto. The new memorial silver coin embossed with an image of legendary 19th-century samurai Ryoma Sakamoto. The administrative agency has been issuing coins representing prefectures since 2008, in celebration of the 60th anniversary of the enforcement of the Local Autonomy Law. Sakamoto Ryōma was a leader of the movement to overthrow the Tokugawa shogunate during the Bakumatsu period in Japan. 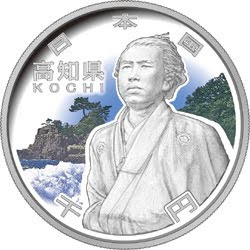 Photo by Mainichi Japan: Commemorative coin to honor samurai Ryoma Sakamoto.
The new 1,000-yen coin is themed on Kochi Prefecture, the birthplace of Sakamoto, a samurai who led the movement to overthrow the Tokugawa Shogunate and made a great contribution to the modernization of Japan. He has been featured in many films and TV dramas, including NHK's ongoing period drama "Ryomaden." A total of 100,000 of the coins will be sold through mail order, at the price of 6,000 yen each. They will go on sale from late May. 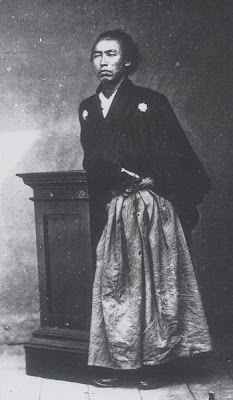 Photo by Wikipedia: Sakamoto Ryōma
Sakamoto Ryōma was born in Kōchi, of Tosa han (present day Kōchi Prefecture, Shikoku) on 3rd January 1836. Ryōma played a crucial role in the subsequent negotiations that led to the voluntary resignation of the Shogun Tokugawa Yoshinobu in 1867, thus bringing about the Meiji Restoration. Ryōma used the alias Saidani Umetarō (Saidani Umetarō) as a cover name during his work to keep Japan united in the creation of a modern government which would allow his country to join the rest of the world which was in a colonizing mode, while keeping its own sovereignty intact. Ryōma was assassinated at the age of 33 (according to the old lunar calendar he was born on 15 November 1835 and killed on his birthday in 1867) at the Ōmiya inn in Kyoto, not long before the Meiji Restoration took place.
Source: Mainichi Japan, Wikipedia