I remember in 2003, when I am still in Penang, they're plenty of these coins selling for RM80-RM150 depending on their grade. Sadly, at that time, I prefer to collect Straits Settlements coins. I am not interested to buy these coins because they're not silver coins and at that time, I do think they're overpriced. After 10 years, the price has gone up steadily, its a bit hard to find these coins and I still don't like to collect Malaysia coins but I need to keep a set of Malaysia coins for my children. 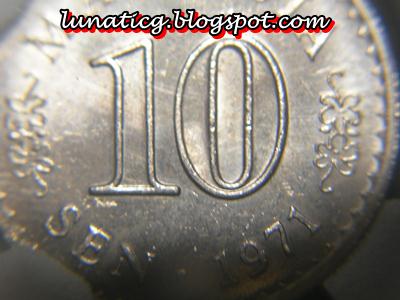 Early this year, Malaysian collectors are shocked by a story about Fake 10 sen 1971. I already reply that in my Malay blog malaysiancoin.com. That news is just a baseless rumour by a collector who think that the 2nd variety are fake coins. He don't even know what variety means and think it is a newly minted coins by a counterfeiter. Right now he is busy distributing a "fake CR note" pictures to everyone. Most of his friends who are newbies and still don't know about numismatic agree to share them on their wall. What a "fake CR note" can do if it totally look like a fake notes? Unless the buyer don't look at the actual note and don't check the note before buying. I don't think the note have an intaglio and raised print too. He also don't even know what a legal tender mean.

What I want to share today is a story about why only 32,236 pieces of Malaysia 10 sen 1971 coins were minted by Bank Negara. For your information, Central Bank of Malaysia Mint in Shah Alam "officially opened" on 10 July 1971 by Tun Tan Siew Sin, Malaysia Finance Minister.

They're many version of story about the coins low mintage. They're no official story by Bank Negara Malaysia (BNM) but if you want to ask them, be my guest. Just don't forget to share them if they ever reply you. Hahaha....

The stories in here are just for sharing, you can decide yourself if it true or not.

First Version-why only 32,236 pieces?
I think most collector already heard about biggest flood ever happened in Kuala Lumpur on 5 January 1971, 32 people were killed and 180,000 people were affected. Before that, whole Malaysia has been raining cat and dog for over a week. Prime Minister at that time, Tun Abdul Razak declared State of emergency for Malaysia. Kilang Wang Bank Negara in Shah Alam were also affected and they had to stop operation. 32,236 pieces were lucky enough because they were produce before the flood affected the mint. The minting process for Malaysia coins in that mint only resumed in 1973. 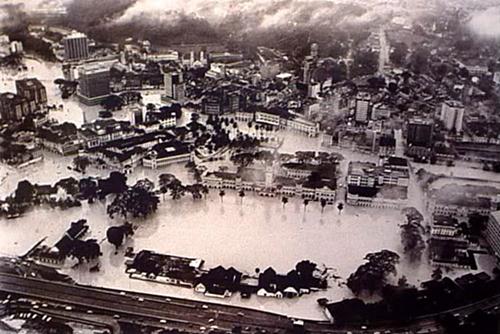 Second Version-why only 32,236 pieces?
The coin were minted in London Mint. When the factory in Batu Tiga,Shah Alam was ready to mint our very own Malaysia coinage in May 1971 ,they called up to put a stop to London Mint, however 32,236 pieces of 1971 10 cents coins were minted. Together was 500,000 pieces of Malaysia 1971 One Ringgit coin minted by London Mint. Source: Dickson Niew.

Third Version-why only 32,236 pieces?
Bank Negara Malaysia have to mint a 10 sen coin for that year because they want to sell a coin set for year 1971, to commemorate the newly open Malaysia Mint. They want to make a 10 sen for that year special, some will be release in circulation but most of them will be put in a 1971 coin set. The plan to make that 1971 coin set don't happen and all the 10 sen coins were released into circulation by mistake. For your information, 10 sen coin mintage in 1967 and 1968 total is more then 235 million. More then enough for population in Malaysia during that year (1971).

Fourth Version-why only 32,236 pieces?
According to Sifu Dickson Niew (same article in the second version), the coins were minted only for 32,236 pieces was because due the dies broke.
Source: Dickson Niew.

What do you think is the right answer for Malaysia 10 sen 1971 coin story? Before you decide, just remember, they're no Malaysia circulation coins minted in the year 1972.