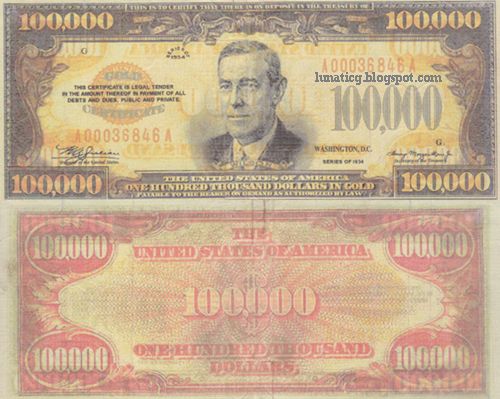 $100,000 Dollars Banknote feature:
The $100,000 bill was released only as a Gold Certificate in the series of 1934. Woodrow Wilson's image was shown on the obverse, while its reverse contained the "100,000" denomination printed in several places in orange- or gold-colored ink.

This 100,000 Dollar Gold Certificate is the highest U. S. denomination. Only 42,000 were printed. They were used only for transactions between the Federal Reserve and the Treasury Department. These notes were never issued for public circulation. When the Government stopped using them, most were destroyed. Only three are known to have survived. One is housed at the Federal Reserve Bank of San Francisco, one at the Bureau of Engraving and Printing, and one at the Smithsonian Institute. It's illegal for a private person to own one of these notes, and none has ever been in private hands.

Why I am saying this is a scam?

Fraudsters often falsely claim that the purported Federal Reserve notes or bonds that they hold are somehow very special and are not known to the public because they are so secret. Fraudsters have attempted to sell these worthless instruments, or to redeem or exchange them at banks and other financial institutions, or to secure loans or obtain lines of credit using the fictitious instruments as collateral.

It should also be noted that the largest denomination of currency ever printed by the Bureau of Engraving and Printing was the $100,000 Series 1934 Gold Certificate featuring the portrait of President Wilson. These notes were printed from December 18, 1934, through January 9, 1935, and were issued by the Treasurer of the United States to Federal Reserve Banks only against an equal amount of gold bullion held by the Treasury Department. The notes were used only for official transactions between Federal Reserve Banks and were not circulated among the general public.

If the offer is too good to be true, it most probably is a scam. Hopefully you don't loose a huge amount of money buying this banknotes.