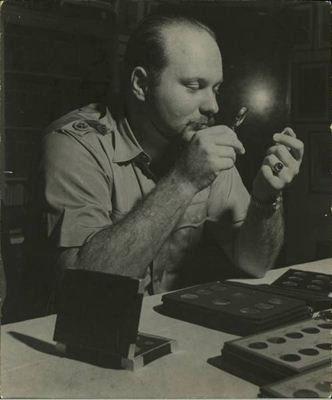 In February and March of 1954, King Farouk coin collection were sold at the Palace Collections of Egypt coin auctions in Cairo, Egypt.

King Farouk I of Egypt was born in 11 February 1920 and at the age of just 16 on 28 April 1936, he became the tenth ruler from the Muhammad Ali Dynasty and the penultimate King of Egypt and the Sudan, succeeding his father, Fuad I of Egypt. Before his father's death, he was educated at the Royal Military Academy, Woolwich, England. 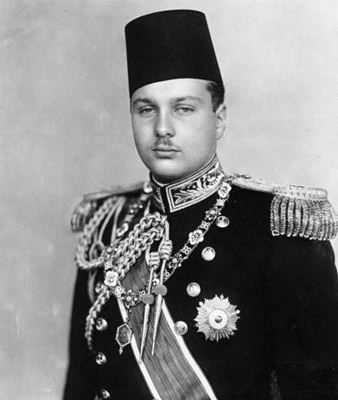 His full title was "His Majesty Farouk I, by the grace of God, King of Egypt and Sudan, Sovereign of Nubia, of Kordofan, and of Darfur".


He was known for his glamorous royal lifestyle and his interest for the rare and unusual items. He collect cars, coins, medals, stamps, works of art in gold and silver, valuable clocks and watches, rare books, ancient Egyptian artefacts. He had also collected trivial objects like matchboxes, razorblades and toothpaste tubes. Although he already had thousands of acres of land, dozens of palaces, and hundreds of cars, the king often travelled to United States and Europe for grand shopping sprees. Some people said King Farouk is a kleptomaniac, he stole everything he fancied. His people will hide their precious items when they heard King Farouk came to their home. Most of King Farouk coins collection were purchased in the 1940s from American coin dealers, who soon realizes that he usually took a long time to pay especially for the invoice totaled more than $10,000. They later found out, he could authorize payments of up to $10,000 personally, invoice totaled more than $10,000 had to be routed to the Egyptian treasury. When the American dealers start to limit his purchased to less than $10,000, he already have a very large collections of coins.


On 23 July 1952, Muhammad Naguib and Gamal Abdel Nasser, staged a military coup that launched the Egyptian Revolution of 1952. On 18 June 1953, the revolutionary government overthrowing King Farouk, ending 150 years of the Muhammad Ali dynasty's rule, and Egypt was declared a republic.


On his exile from Egypt, Farouk settled first in Monaco, and later in Rome. He died in the Ile de France restaurant in Rome on 18 March 1965. He collapsed and died at his dinner table following a characteristically heavy meal. Some people claim that he was poisoned by Egyptian Intelligence.


The Palace Collections of Egypt Auction

When King Farouk was removed from the throne, Egyptian revolutionary government took over all his arts, antiques, sculptures, stamps, coins and medals collection that he left behind and trying to liquidate and return the profits to the national treasury. They put all the items into a series of auctions and called it "Palace Collection of Egypt" without mentioning King Farouk by name. Two London firm was hired for the auction, Baldwin & Co. was hired to describe the coins and Sotheby & Co. publishing the catalog. 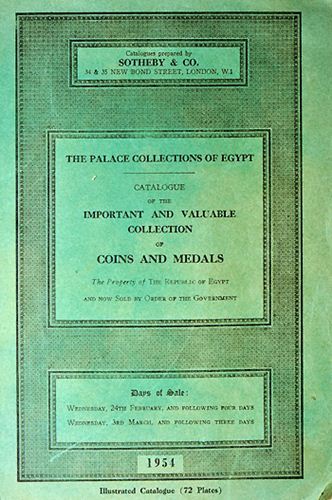 
Today, the actual Palace Collections of Egypt catalogue itself is a valuable numismatic item, very few exist and valued hundreds of dollars a piece.

The famous 1933 Gold Double Eagle suppose to be destroyed by the US Treasury and melt them into gold bars following President Franklin Roosevelt Executive Order 6102, People were ordered to turn in their gold and no more gold coins were to be issued for circulation. 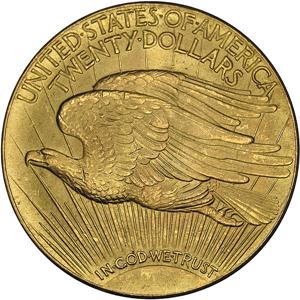 10 of the coins surfaced in the 1940's, the US Secret Service tracked down nine of them and destroyed them. a Texas dealer sold one of the coins and it was on the way out of the country on 22 February 1944. The missing double eagle was acquired by King Farouk of Egypt.


When the auction of the Palace Collections of Egypt start, The United States Government requested the return of the coin, and the Egyptian government stated that it would comply with the request. However, at that time the coin disappeared and was not seen again in Egypt.


You can read more about the story of the famous expensive coins in this post: USA 1933 gold double eagle.

The set of five Liberty Head coins dated 1913 were secretly produced by a Philadelphia mint worker named Samuel W. Brown and he altering the die to add the bogus date. Brown sold the set in 1920 at the American Numismatic Association Convention in Chicago. The five remained together under various owners until the set was broken up in 1942. 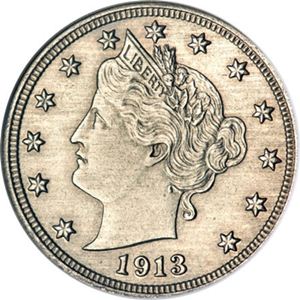 Of the five Liberty nickels, two are in museum collections, leaving just three available to collectors. In the past decade auction appearances of 1913 Liberty nickels have been rarer than the coins themselves. Like the other 1913 Liberty nickels, the example offered by Heritage has become individually famous. It is known as the "Olsen specimen" after an early owner, but his is hardly the only notable name in its provenance.


The rare 1913 American nickel five-cent piece also known as The Liberty Head nickel, sometimes referred to as the V nickel due to its reverse design and dubbed as "The Mona Lisa of Rare Coins."


The nickel was famously featured in an episode of the 1970s television show "Hawaii Five-O". In the 1970s, one of the five 1913 Liberty nickels was believed to be lost and another had sold privately for $100,000 and this very coin became a TV star. It became the "central character" of a Hawaii Five-O episode appropriately titled "The $100,000 Nickel." The genuine Olsen specimen was only used for the close-up shots during filming. For all other scenes the nickel had its own "stunt double."