lunaticg 9:13:00 AM
Here is a list of "World's Most Expensive Coins" according to my record in lunaticg.blogspot.com. Most of the coins in this list are came from United States. Most of these coins are sold in auction around the world and some were sold in private treaty. These coins are extremely rare and they're a lot of counterfeit in the market. I advice everyone who has the same coin, don't just jump into conclusion that you have a rare coin. Your coin might be fake or have a different year date then what I post in here. 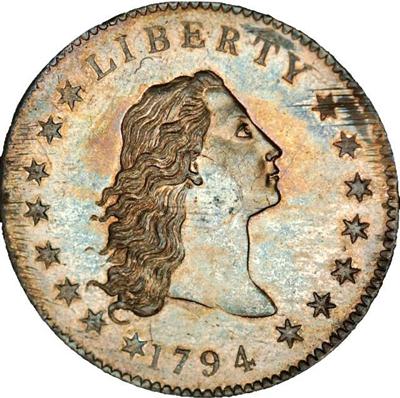 On 24 January 2013, A 1794 silver dollar sold for USD$10,016,875 (including the buyer's commission) in Stack’s Bowers Cardinal Collection auction. The coveted 1794 Flowing Hair silver dollar, a superb Gem Specimen example, the finest known to exist. The coin was part of the Cardinal Collection, amassed by the collector Martin Logies. Bowers described the collection as the "Old Masters" of coins struck during the earliest years of the U.S. Mint. The record-setting coin shows a profile of Miss Liberty facing right surrounded by stars representing each state in the union. The design was only used in 1794 and briefly the following year. Read More: 1794 silver dollar sells for US$10mil. 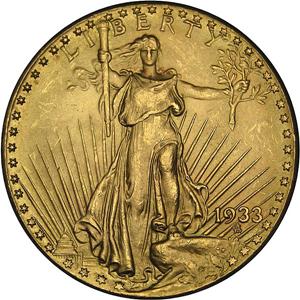 On 30 July 2002, a 1933 double eagle was sold to an anonymous bidder at a Sotheby's auction held in New York for $6.6 million, plus a 15-percent buyer's premium, and an additional $20 needed to “monetize” the face value of the coin so it would become legal currency, bringing the final sale price to $7,590,020.00. Half the bid price was to be delivered to the United States Treasury, plus the $20 to monetize the coin, while Stephen Fenton was entitled to the other half. Under sworn testimony, Fenton insisted the double eagle had come from the collection of King Farouk, though this could not be verified. Read More: USA 1933 gold double eagle. 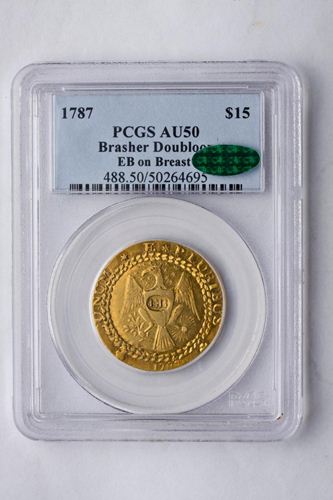 On December 2011, a $15 dollar 1787 Gold Brasher Doubloon EB has been sold for $7.4 million. The rare 1787 gold Brasher doubloon purchased by a Wall Street investment firm. A New Orleans-based coin and precious metals company, Blanchard and Co., brokered the deal but identities of the buyer and seller were not disclosed. Minted by Ephraim Brasher, a goldsmith and neighbor of George Washington, the coin contains 26.66 grams of gold, slightly less than an ounce. The Brasher doubloon is considered the first American-made gold coin denominated in dollars; the U.S. Mint in Philadelphia didn't begin striking coins until the 1790s. Read More: 1787 gold coin sold $7.4M. 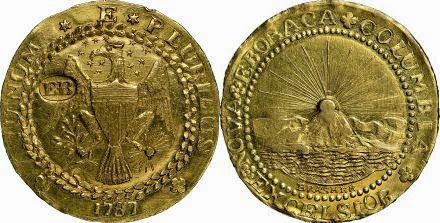 On 9 January 2014, a 1787 Brasher Gold Doubloon graded NGC MS63 with CAC sticker, Finest-Certified Example of This Classic Rarity, sold for USD$4,582,500 by Heritage Auction. Brasher Doubloon hand-struck in 1787 by George Washington's New York City neighbor, Ephraim Brasher. This particular Brasher Doubloon has been off the market since it was purchased by a Chicago resident in 1979 for a then-record price of $430,000. It was the subject of a Raymond Chandler book, a Hollywood movie and it was displayed by a previous owner at the 1964 World's Fair in New York City. Read more: 1787 Brasher Gold Doubloon sold for USD$4,582,500. 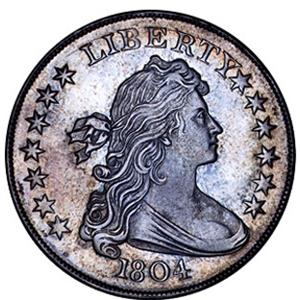 On 30 August 1999, a 1804 silver dollar sold in auction by Bowers and Merena Galleries for $4,140,000. That figure included a hammer price of $3,600,000 plus a 15-percent buyer’s fee of $540,000. The piece was an original (or Class I) example considered to be the finest of all the known 1804 silver dollars (graded Proof68 by PGCS). The coin had been part of a presentation set given by U.S. envoy Edmund Roberts to aid bin Sultan, Sultan of Muscat and Oman. The 1804 silver dollar has been christened "The King of Coins" as it is one of the rarest and most prestigious American coins ever minted. 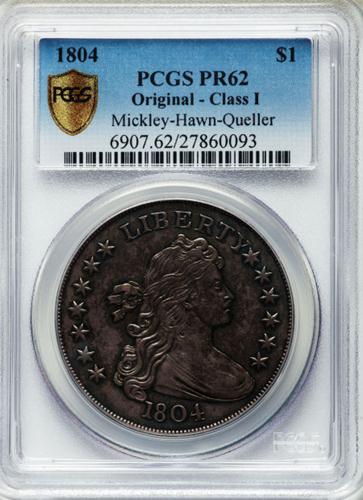 On January 2010, a rare 1913 American nickel five-cent piece also known as The Liberty Head nickel, sometimes referred to as the V nickel due to its reverse design, recently dubbed "The Mona Lisa of Rare Coins," was sold for more than $3.7 million (2.3 million pounds) in Heritage Auctions Platinum Night. The so-called Liberty Head nickel, one of only five known of that specific date and design, was sold "in spirited bidding" to a private East Coast coin collector in Orlando. The 1913 5 cent coin, also known as the Olsen specimen is the most expensive and famous Liberty Head Nickel. This is because it was used in the TV series Hawaii Five-O (episode title: "The $ 100,000 Nickel", published on December 11, 1973) and is also said to be once owned by King Farouk of Egypt. This coin grades Proof-64 from PGCS and NGC. Read More: Mona Lisa of Rare Coins: 1913 Liberty Head nickel.