lunaticg 6:32:00 PM
RM5,000 for a single piece of circulated 50 sen 2006? Will you pay that amount of money for Malaysia coins? Have any of you saw Malaysia 50 sen 2006 before? According to Steven Tan book 19,480,000 pieces of the 50 sen has been minted by Bank Negara Malaysia (BNM) in 2006 but until today, I don't see a single piece of that coins in circulation or on sale by any of the Malaysia coin dealer. I am not sure about you but look like I had been doing a ghost chase for over 6 years. Some collectors simply stop looking for that coins and say that Steven Tan books had been putting the figure by mistake. They don't want to believe Malaysia stamps and coins sifu wrote his book based on fact provided by BNM. 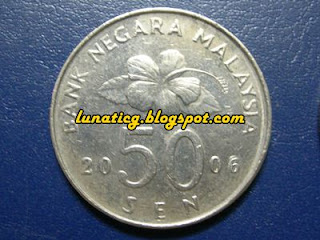 Thanks to Dickson Niew who wrote an article; Yes! 50 sen were minted in 2006, for showing an evidence of a BNM letter to Steven Tan dated 6 May 2010, with an approved mintage quantity of the coins. Look like Steven Tan is just following BNM data that had been given to him. Dickson Niew in his article also question the figure of Malaysia coins "approved mintage quantity"? If you are following his blog, you might understand what he meant. Some of Malaysia coins year of mintage is questionable since you can see plenty of it in the BNM figure but only some pieces can be found in circulations. Most of us believe the coins had been going back into BNM and had been dispose or some collectors had been keeping a large amount of the coins. We never question the figure we see in any of Malaysia Numismatic book.


This coin will be be another ghost chase cases for Malaysia coin collectors. Don't forget, you also need to do a ghost chase for 1988 $1, 50 sen and 20 sen bunga raya coins. All these coins a very rare compare to 10 sen 1971. If you're not a collector and you find any of these coins, you can always contact me via email with your coin pictures. I am not an avid collector of Malaysia coins but I know many of my friends will be willing to pay a high amount of money to keep that coins in their collection. If you're wondering about the coin in the picture, that is just a photoshop coin but I am willing to sell it to you for 50 percent discount if you want. A kind of coin that you cannot keep in your coin holder.

PS: A lot of changes had been happening in blogger world lately. I am closing the comment form for a while until I complete updating my blog. You can always give your comment in my Facebook page.