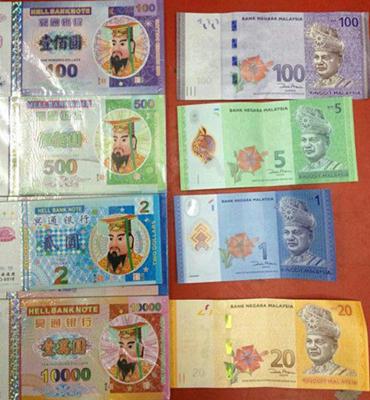 Some of people who circulating the pictures said that the hell notes has been produced earlier then the new Malaysia banknotes. Many of them think that the new banknotes has just been released on 16 July 2012. Exactly, Malaysia new banknotes design has been released by Bank Negara Malaysia since 21 December 2011. Many collectors has bought a set of the banknotes sold by Bank Negara as a collector item with the same serial number starting on the next day. I know many of you are not a collector but please get your fact right before you give any opinion. Its not the new banknotes that duplicate the hell banknotes but it is the other way around. Nowadays, almost anything new that Malaysian or Malaysia government introduced will be politicized or given a bad impression by our own public. I don't know what is the exact intention people who release the picture want but as what I know, it is an offensive thing for Chinese to give Hell notes to a living person. Maybe their intention is for public to reject the new banknotes as it look like a hell banknotes.

To help some of you who still don't really understand your own money, you can refer to my old posts: