lunaticg 10:30:00 AM
Last month, an anonymous numismatist from Uttar Pradesh, make a record for India most expensive coin ever sold in an auction. His East India Company 1835 King William IV two mohurs gold coin sold for 11.5 lakh (13 laks after tax) in an auction by by Marudhar Arts, an Archaeological Survey of India-licensed auction house. 13 lakh in Indian Rupees is 1300000 Rupees ( around $USD14,340.08). The coin purchased by Bangalore-based businessman Arvind Kumar. The coin purchase involve a total expenditure of Rs. 13 lakh, as his new possession will also attract service tax, sales tax and value added tax, besides the auction house's commission. 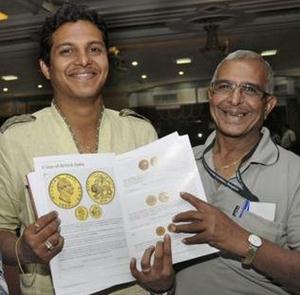 Picture by the Hindu: Arvind Kumar and his son.


Classified as “extremely rare” in numismatic circles, the King William IV Two Mohurs 1835 weighs 23.32 gm or two tolas of gold. The minting of double mohurs at Calcutta Mint began before the end of 1835 and the British government put these into circulation on January 1, 1836. The coin is 32 mm in size and has William IV to the right in obverse and R.S., the initials of Robert Saunders, the Mint Master of Calcutta Mint from 1826 to 1836. The exact number of double mohurs minted in 1835 is not known. Those auctioned these days, including the one auctioned on Saturday, were from about 1,300 coins re-struck at Calcutta Mint in 1948.


According to auctioneer Rajendra Maru, the bid amount for the double mohur was the highest ever for any coin in India. He said that the previous highest sale on an Indian coin was at Rs. 8 lakh for a gold coin of Chhatrpathi Shivaji's era. 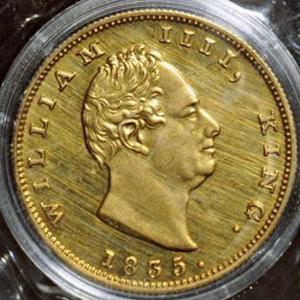 On the obverse, bare head bust of William IIII to right, English legends WILLIAM IIII KING. Large dot appears after the date 1835, incuse R.S. on the truncation. R.S. is the initials of Robert Saunders, the Mint Master of the Calcutta Mint from January 1826 to January 1836. 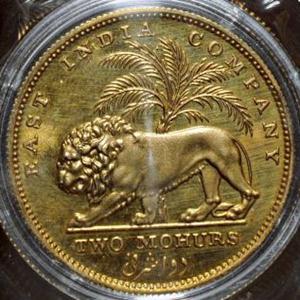 On the reverse show lion facing to the left in front of palm tree with English legends EAST INDIA COMPANY.The value in English and Persian Legends (Do Ashrafi or which means Two Mohurs).


When will we can see a Malaysia coin fetch million ringgit in auction? The best price (not the most expensive) so far is the 1 sen 1976 sold for RM3600. Its a one cent coin and sold for over three thousands ringgit, isn't that exciting? When the coin price still cheap, I advice you to buy any rare Malaysia coins that you can. Who know, one day you can become a millionaire.