lunaticg 7:46:00 AM
A rare 2 speciedaler 1658, struck in Norway during the reign of the Danish King Frederik III (1648-1670) fetched the highest ever price for a coin auctioned in Denmark when auction house Bruun Rasmussen sold it for 1.15 million kroner (USD 170,000) at Baltikavej 10 in Copenhagen's Nordhavn on Tuesday 3 November. 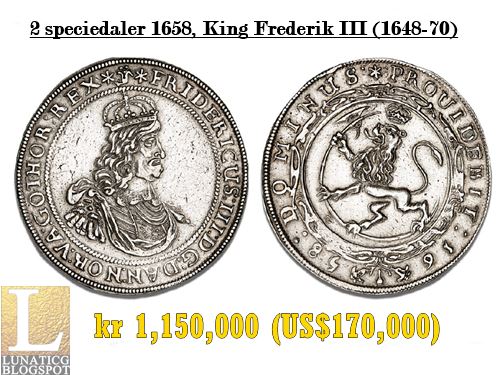 "It is a beautiful coin, which is destined to become the most expensive coin ever sold at auction in Denmark - both because of its rarity, aesthetic appeal, quality and historical significance. The coin is undoubtedly the most spectacular coin, which Bruun Rasmussen has ever had up for auction. We are very excited about the auction, and we look forward to see how the sale goes," says Michael Fornitz, chief numismatist for Bruun Rasmussen's coin auctions.


The unique coin was presumably intended as a presentation piece for Frederick III’s “Kunstkabinett” in Copenhagen, but - possibly as a result of the ongoing wars with Sweden at the time – the coin never reached its destination. Instead it has, since it was struck, lain unnoticed in a family’s possession, first in Norway and later in Denmark.

An unnamed Norwegian was the highest bidder and the new owner of the coin, which is the only one of its kind and is in remarkable condition despite being over 350 years old.


The winning bidder told Fornitz that he viewed the rare coin as "the holy grail", 'The Local' reported.


The coin has been in the possession of a family that first had it in Norway and later in Denmark.


According to Fornitz, the latest family members assumed possession of the coin in 1982 and it laid in a box with an assortment of other, mostly worthless, coins.

Earlier this year, the family decided to see if their King Frederik coin was worth anything.


"It came as a bit of a shock in a good way when the price turned out to be a bit higher than they expected," Fornitz said.