lunaticg 7:39:00 PM
When I visit Dickson Niewmismatic shop on 30 September 2011, I also had a chance to interview him. Beginner need someone who had been a successful in his field to inspire them, this interview is for beginner collector who need to be inspired. I had seen many newbies collector collect something because they friend collect them not because value of the collection. Coin collecting is a rewarding hobbies, if you collect a wrong thing, it will be a waste of money. I hope interview with Dickson Niew will inspire some of you who had just start collecting. Will try to do more interview in the future. 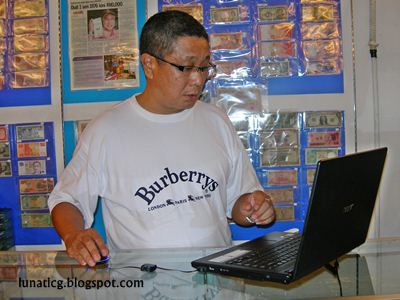 When do you start collecting

I had been collecting coins since I am a little children but only do it seriously in 2007. I am lucky because my eldest brother now in Singapore is a hardcore coin collector. I had a chance to take some of his extra collection and keep it as my collection.

What do you collect?

Nobody give me inspiration to start collecting but you can say my brother force me to collect.

You most precious collection?

1976 1 sen copper. Not because of its price but on how I get it in my collection. I had been asking many of my numismatic members if they had that coin in their collection, not easy to get but worth it. I also have a complete set of Brilliant Uncirculated Parliament series.

Where do you get your collection?

I get almost all my collection in Malaysia; Coin shop, pasar karat, flea market and Malaysia eBay.

Future of coin collecting in Malaysia

Nowadays, I had seen many youngster start to collect coins. Some of them come from a professional background; Doctor, Lawyer, Engineer etc. I also have shop visitors from my Facebook friends. But I had seen youngster trend to collect solid numbers banknote, you should try to collect Malaysia tin coins. its far much better in value and history. You can get a solid number in every circulation but you cannot get duit ayam, jongkong or Johor Katun when nobody want to sell them. It is part of Malaysia history.

Counterfeit coins in Malaysia
For me, a counterfeit 1985 50 sen in my possession is the best Malaysian counterfiet coins. It look almost the same with the original 1985 50 sen.