lunaticg 5:57:00 AM
Do you know that 1976 1 sen now RM3600? For any of you who had been following my blog and read my post about Malaysia Numismatic Society Auction 149, its an old news but for a newbies its a shocking news. Many of them believe that it is the normal 1976 1 sen coin that has a high value among collectors. One reader even argue with me that I am not telling the truth about its value. He pay RM50 a piece from a collector who sell him 2 pieces of the normal  copper clad steel coins last year. For anyone who still doesn't know, 1976 1 sen copper don't attracted by magnet, you can test it before you buy them. But for RM50, something wrong some ways. 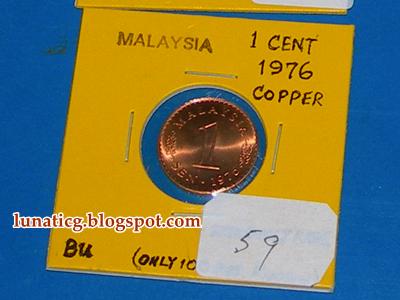 In a recent Malaysia Numismatic Society Auction held on 26 September 2011 at Malaysia National Museum, Kuala Lumpur, a record has been made. The auction price goes up to RM3,600 (USD1150) with a reserve price of RM1,000. Its like a battle of mens fighting for a women that they adore and like. The recent Mavin International Auction, Singapore on 16 July 2011, 1 sen 1976 copper has been closed at a high price, SGD1,400 (excluding tax and commision). In Steven Tan catalog, he wrote only 100 pieces of this coins known to exist in circulation or in collectors hand. For the normal 1 sen copper-clad steel, 27,406,103 pieces are in circulation. Do your own math, how high the probability of you find this coins?


Malaysia error coins don't have a high value like what we can see in the US yet. Probably one day you can see this kind of rare and error coin prices goes up to million ringgit. But for now, RM3600 is a history and if you look at the probability of you finding the coin, that price is still very cheap. For newbies collector, you can dream of having this coin in your collection. In the recent MNS auction, I can see many collector try to touch the coins/touch and look at them, "Kalau tak dapat simpan, pegang pun jadilah" (If I cannot own it, touching it will be enough) habits. 1 sen 1976 copper will be dream for most Malaysia coin collector. How to detect 1976 1 sen copper.