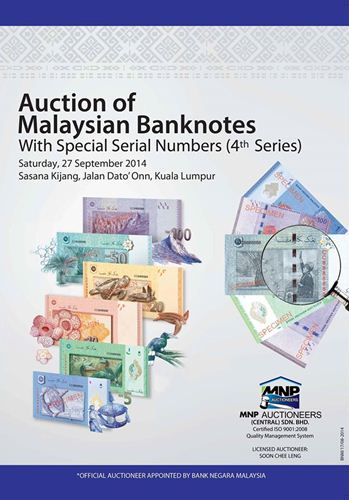 
On September 10, Bank Negara has released a Press Statement about the auction:

The purpose of the auction is to provide equal opportunity to all members of the public to obtain these coveted banknotes with special serial numbers such as CC8888888 or AY1234567. These special serial number banknotes command premium in the collectors’ market. The auction will also serve one of the initiatives by Bank Negara Malaysia to promote interest and greater appreciation in numismatics amongst the general public.

The proceeds from the auction will be channelled to support the Corporate Social Responsibility (CSR) programmes of the Bank including the provision of free gadgets to assist the visually impaired and small retailers in identifying and authenticate banknotes. The proceeds will also be used for outreach programmes to educate the public on the techniques to authenticate banknotes and coins as well as the proper handling of polymer banknotes."
Source: bnm.gov.my


Before performing the actual auction, MNP Auctioneers will be making a demonstration about the banknote auction process at their MNP’s Kuala Lumpur Office & MNP’s Penang Office:
-Demonstration and Understanding of Banknote Auction Process (Kuala Lumpur).
Thursday, 18 September 2014, 10.00 a.m. to 2.00 p.m.


All lots sold through floor bidding, telephone or authorized bids are subject to a Buyer's Premium of 15% of the Hammer price, payable by the successful bidder in addition to the hammer price.


I don't see any single ten million prefix note in the auction and I also can see only few AA prefix notes in the auction too (correct me if I'm wrong). Is this a test by BNM before they're making the "real auction" or this is the only Malaysian Banknotes With Special Serial Numbers in their possession? Good luck to all my friends who will be bidding the special prefix notes. You can read more about the auction at MNP website; www.mnp.com.my