lunaticg 5:07:00 AM
A 1841 Sarawak James Brooke 1 Keping copper coin will be offered in September 25 London Auction by A.H Baldwin & sons ltd. The Token Copper Keping "1841" coin is the first Sarawak coinage issued under Rajah James Brooke’s rule. The copper token is estimated to sell for £400-600. 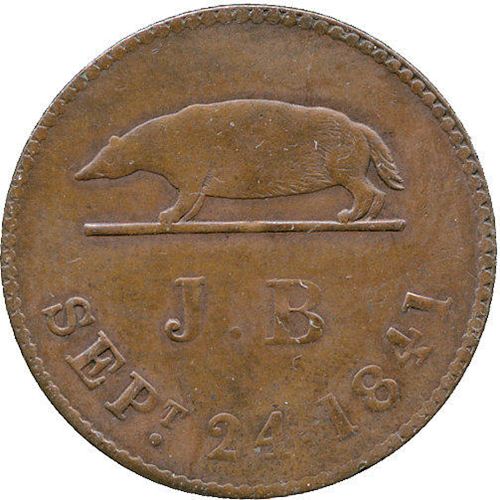 The coins feature a badger facing left, with initials J.B. (for James Brooke) under the badger and dated September 24, 1841 (the day James Brooke granted Rajah of Sarawak by Raja Muda Hassim of Brunei), to commemorate the date Brooke was made Rajah. The badger, or brock, is derived from the crest of the Brooke arms.

The 1841 dated One Keping coin made by the Birmingham Mint using an old reverse die from one of the Singapore merchants token. These pieces are very scarce and highly prized by collectors in any condition. According to the latest Steven Tan 21st Edition Book, a very good condition coin is price at RM5,000 for this coin.

Another coin that I think might be interesting for my readers is a 1943 Netherlands East Indies, Japanese Occupation silver trial 5 Sen theatre puppet coin. The coin is in NGC holder graded MS61, ex Dr Norman Jacobs Collection, Heritage Auction, 8 September 2011, lot 24420. The normal circulation strike is in white metal (aluminum), and this is the first example we have seen offered, or even heard of existing, in silver. The coin have an estimate of £12,000-15,000.

Another Netherlands East Indies, Japanese Occupation coin in the auction is the 1944 Aluminium unissued Sen. The coin is in PCGS holder graded MS63, ex Dr Norman Jacobs Collection with an estimate of £300-500. The 1944 Japanese Occupation cent is struck at the Osaka mint for Netherlands East Indies with 80,000,000 coins ordered to be struck but not a single coin enter circulation because of the war.

One of the most important Hong Kong coin will also be in the auction, King George VI, 1941 Hong Kong one cent bronze. The extremely rare is in extremely fine condition with orange and purple dappled tone with an estimate value of £2000-2500. Because of the demand for bronze in arms manufacture during Japanese occupation, The Japanese authorities in Canton were importing coins from Hong Kong and melting them down to make the weapons. 5,000,000 1 cent coins were minted by Royal mint, London but many believed the entire shipment fell to the Japanese and sent to Japan for melting. Only a few of the 1941 coins have survived.

WORLD COINS, USA, UNITED STATES OF AMERICA Panama-Pacific Exposition, Octagonal Gold 50-Dollars, 1915S, San Francisco, head of Minerva left, rev owl on California pine branch, E PLURIBUS UNUM to right (F 189; KM 139). In PCGS holder graded AU53, warm gold toning, an attractive specimen of this very rare coin.
Designed by Robert Aitken and issued in both round and octagonal form. The Panama-Pacific Exposition was a celebration of the completion of the Panama Canal, and the 400th anniversary of the discovery of the Pacific Ocean by Balboa. "E PLURIBUS UNUM" was the motto proposed for the first Great Seal of the United States by John Adams, Benjamin Franklin and Thomas Jefferson in 1776. The Latin phrase meaning "one from many", offered a strong statement of the American determination to form a single nation from a collection of states. Over the years "E PLURIBUS UNUM" has also served as a reminder of America's bold attempt to seek unity while respecting diversity.
Estimate: £25,000-30,000 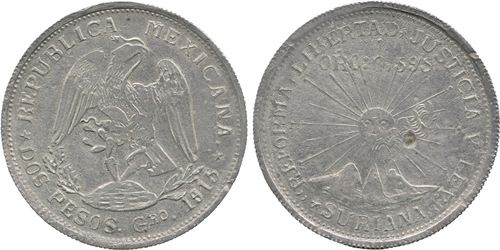