lunaticg 8:02:00 PM
In 2014, Brazil hosts the final phase of the 20th Football World Cup, a competition organised by FIFA, gathering 32 nations from the five continents around the world. To mark this major sports event, Imprensa Nacional-Casa da Moeda INCM (Portuguese mint and national press), is issuing a commemorative collector coin with a face value of 2.50 euros, €2.5 Portugal FIFA World Cup 2014 gold proof coin, designed by sculptor Hugo Maciel. This issue is limited to 15,000 copies in proof silver and 5,000 copies in proof gold, presented in a case with a guarantee certificate. 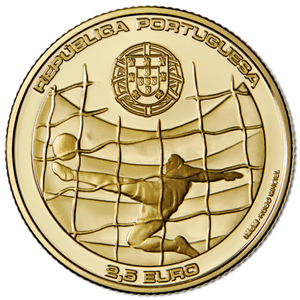 On the coin obverse show the words "República Portuguesa" and the face value with an image of a football player shooting/saving a goal and The Portuguese coat of arms. 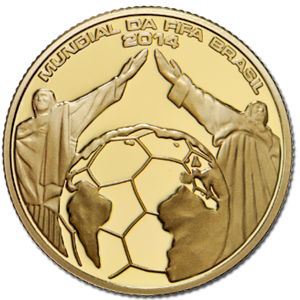 On the reverse show the statues Christ the Redeemer (Brazil) and Christ the King (Portugal) with a ball/globe amalgam beneath and The words “Mundial da FIFA Brasil 2014”.


Banco de Portugal will also put a cupronickel-alloy collector coin into circulation from 30 January 2014, with face value of €2.50, entitled "Mundial da FIFA Brasil - 2014" ("2014 FIFA World Cup Brazil"). The coin will be distributed to the public through credit institutions and at Banco de Portugal's cash offices.