lunaticg 5:58:00 PM
On Tuesday, an ancient Gold Coins found in Banda Acheh, Indonesia. A chest containing hundreds of Acheh gold coins dating back to an ancient Aceh kingdom were found by an oyster gatherer when they're looking for oysters in a swampy area in Gampong Pande village, Banda Aceh. The gold coin chest was discovered near an ancient cemetery destroyed by the 2004 tsunami. 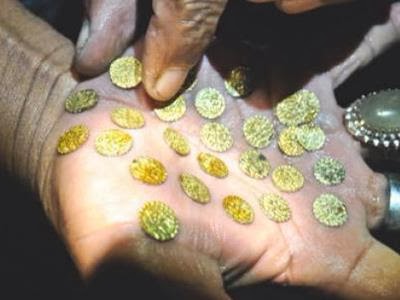 The oyster gatherer who found the coins was unaware that the chest was filled with gold coins. Hundreds of gold coins spilled out when she broke the chest. When the news about ancient gold coins found at the Gampong Pande village, hundreds of people from around the place were quickly on the scene, they came with tools to search for gold coins on the riverbed and swamp near the ancient tombs.

Several gold traders and coins trader were also at the site buying the coins from the residents. For small gold coins they were buying it for IDR350,000 and IDR800,000 for the larger gold coins.


The Gampong Pande village was the location of the first Islamic kingdom of Aceh; Aceh Darussalam kingdom. From the 13th to the 17th century, Gampong Pande village evolved into an industrial area, becoming a center producing various goods, including gold coins, thus its name. Gampong Pande literally means “village of the expert or master craftsman”.