Where dollar symbol come from?

lunaticg 4:33:00 AM
Do you know where dollar symbol ($) come from? Do any of you remember, the recent RM16 million "Vtraque Vnum" issue in Malaysia local news? You can read it here; Stupid collector want to be popular. The coin known as "Vtraque Vnum" in the local news are exactly known as "Pillar dollar" or "Spanish dollar" or "piece of eight". They're many version of story where the dollar sign come from but I myself believe that the symbol come from the pillar dollar. Sifu Dickson Niew also support the theory when I meet him last week. I ask his help to write a post on How to detect fake Vtraque Vnum coin. I knew they're many fake pillar dollar in Malaysia local market sold as genuine by some dealer. 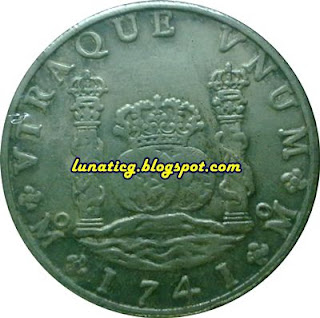 The Dollar sign "$" is first found in British, American, Canadian, Mexican and other Spanish American business correspondence in the 1770s. The Spanish peso is a model for United States coins in 1785, Mexican peso, Peruvian eight-real and Bolivian eight-sol coins. The name Pillar dollar came from two pillars engraved on the reverse side to symbolize the "Pillars of Hercules" at Gibraltar. The coin also known as "Pieces of Eight" from the practice of cutting them in pieces to make change, most often in quarters (two reales).

The best documented explanation reveals that the sign evolved out of the Spanish and Spanish American scribal abbreviation "ps" for pesos. A study of late eighteenth- and early nineteenth-century manuscripts shows that the s gradually came to be written over the p developing a close equivalent to the "$" mark.

There is another version of the theory linking the sign to the Spanish peso. As mentioned earlier the peso was subdivided into eight reals, hence the name piece of eight. This was represented as P8 or /8/. Eventually it became customary to write the oblique strokes across the figure 8. In the past precious metal coins were sometimes split into pieces to provide small change. The use in America of the expression two bits for 25 cents is a legacy of this since if a Spanish dollar or peso or piece of eight was split into quarters each part would consist of two of the original eight pieces or reals. The 8 with two strokes became a letter S with two strokes since S looks like an 8 that has been split, as when a peso was broken to provide change in reals. Eventually a further simplification was introduced by dropping one of the strokes.

You can read more about it here: The Word "Dollar" and the Dollar Sign $