lunaticg 1:07:00 AM
Evita Peron 100 peso banknote to commemorate her 60th anniversary of her death has been unveil on Wednesday by Argentine President, Cristina Fernández de Kirchner. The new banknote inspired by 1952 Argentina 5 Pesos bill which has been design after Evita death but when the military dictatorship took power in 1955, the banknote has been withdrawn. The new bills will be legal tender but there is no information about how many banknotes would be issued or when they would enter circulation. She's the first woman to appear on any Argentine banknote. 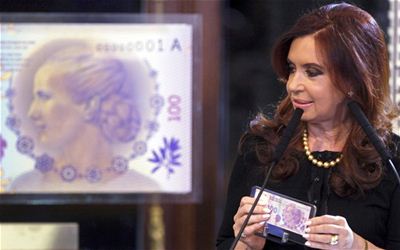 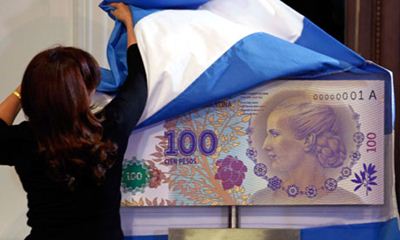 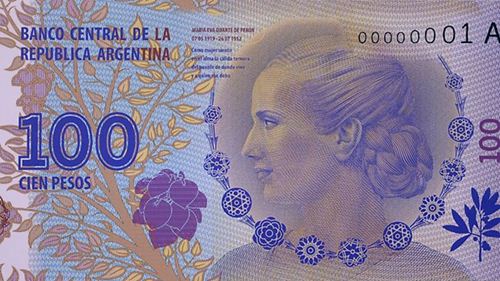 Mrs Kirchner, whose party was inspired by Evita's husband, Juan Peron, said the initial printing will be commemorative, but she said she wants all new 100-peso notes to eventually carry the former first lady's image, replacing that of Julio Argentino Roca, a 19th century president. Fernandez thanked the staff of the Mint and the note designers for their help in making the project happen. She was joined at the launch ceremony by various government figures and the governor of the Central Bank of Argentina, Mercedes Marco del Pont.

Evita, who found fame as an actress before marrying Peron, is adored by many Argentines for helping women get the vote, securing labour benefits for the working classes and founding hospitals and orphanages.

In 1994, a musical "Evita" written by Andrew Lloyd Webster and Tim Rice which was made into a film by Alan Parker with Madonna as the first lady. The film earned Madonna a Guinness World Record title, "Most costume changes in a film". The face of Evita has appeared in commemorative coins, one in 1997 under President Carlos Menem in honour of the fifty years of the woman’s vote, a bill sponsored by Evita and in 2002 when the half century of her death.