lunaticg 7:50:00 AM
Bank Negara Malaysia (BNM) Pertabalan Seri Paduka Baginda Yang Di-Pertuan Agong XIV commemorative coins sales today turn to be a bit havoc then usual. Some of my collectors friends says the coins sales even started before BNM officially start selling the coins today. For information, BNM has been releasing the news about the new Agong coin since 22 June 2012, a bit early then usual. Thank you BNM for the effort to inform collectors early. That's really helping everyone who mostly working to prepare and attend the new Agong coin sales at the nearest BNM branches. I am glad, information that I received before, that most of the proof coins already reserved for VVIP is not correct. Almost all collectors who came early morning and queuing at all BNM branches can get at least one piece of the proof coins. 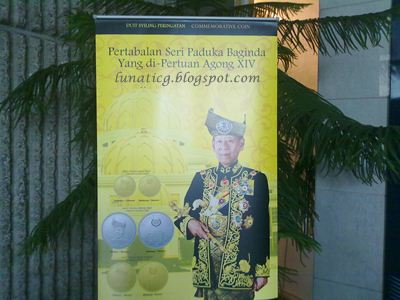 I arrived at BNM Headquarters in Kuala Lumpur at around 7am. When I pass by the gate, I saw people already queuing near the BNM gate, around 200 people. I walked as fast as I can to join the crowd. When I reach the queue, Dato' Sharuddin, founder of Kelab Warisan Numismatik queue in front of me. We talk via phone before but never personally meet, it is a great honour to meet and chat with Dato Shah. We talk about our numismatic experience and he show his collection pictures. We also chat about his vision and planning for the new club. I and almost many other collectors really hope he and his new club can bring coin collector to visit Kilang Wang Bank Negara in Shah Alam. It is almost an impossible mission but who know what can happened in the future. I also meet another blogger, MgmSabri, he inform me that he has been there since 5am and they're already around 150 people when he arrived. 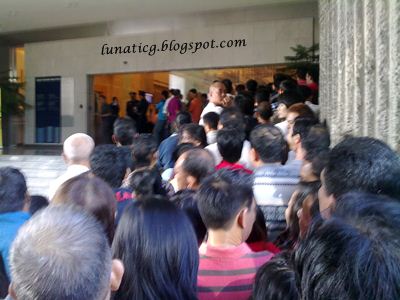 At around 9.30am, some of the crowd started to push others and shouting. Most of them are young Chinese guys and girls. 10 minutes later, BNM start their 14 Agong coins sales. Some of the crowd start pushing others in front of them aggressively. Some of the BNM Auxiliary police start instructing the crowds to make 2 lines, at that time, they're at least 5 lines queuing for the commemorative coins. I do think it is already to late to give that kind of instruction since people don't want to loose their place. Some of them has been queuing since 5am (using that 5 lines). BNM are using the same rules when they release Pandu Puteri commemorative coin but with only 5 coincard +your proof coin set. I managed to get my set at around 10.30 am. At that time, set of 2 already finished. Sifu Dickson Niew inform me that one hour later, only single proof gold and coin cards are available for collectors to buy.


Some of the crowd wish in the future, instead of queuing BNM can issue a numbers (QMS Sistem nombor Giliran) for collectors. Some of them against the idea since some people who came early might be manipulating the numbers. Some of the crowd also wish BNM Auxiliary police to start giving instruction early to people instead of only doing their work when more crowd coming to line up. Some of them wish that BNM can start the sales of the future commemorative as early as 8am to ease up the crowd. Hopefully BNM can take some of the idea into consideration.


They're also concern by some of the old collectors about a new trend of selling the new commemorative coins before BNM actually released the coin into market. You can read it at my-koleksi blog; Harga Syiling Peringatan Pertabalan Yang di-Pertuan Agong XIV dah NAIK Tapi BNM Belum Jual Lagi kan? For me, they're pros and cons for the new trend and I do think that trend is not a new thing. I myself has been using "runner" service before I start buying my own commemorative coins in 2011. The "runner" help people who are busy and cannot go to the sales day to buy the new coins. Most of the time they charge for a fee between RM30-RM100. I stop using their services when they start to charge RM100 for each proof coins and RM10 for each coincard. In my opinion, its up to the buyer to accept the fees or buy the coins themselves without any fee. The only problem is that these runner can actually planned their coin buying since BNM announce the sales day early. When many people booked the new coins with them, we can see a large crowd queuing at BNM, like what happened at BNM KL today. In my opinion, almost 60% of the crowd is not collectors.

What do you think about this matters?