lunaticg 9:50:00 PM
I were doing some old post update last week when I found out an old post, 1976 bronze 1 sen story. The old post make me wondering where do I get the idea that the rare 1 sen 1976 is bronze not copper? I look back at old my post related to that story, I cannot find any clue. When I check all the reference book that I have, I found out that I get the idea from Steven Tan Catalogue book. In every edition of Steven Tan Book, I found 1 sen bronze variety. I don't want to rush and share this with everyone since Steven Tan is a Master Sifu to every Malaysian collector out there. I must check with other sifus to double confirm; 1976 1 sen copper or bronze? 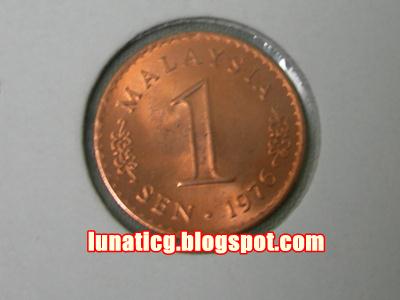 I talk via phone with two of my sifu in Penang and asked them about the 1976 1 sen. One of them said that since Steven Tan said it is a bronze, that maybe true. Steven Tan has been in this business longer then him. When I said the coin doesn't look like a bronze coin, my sifu reply, Steven Tan maybe has tested the 1976 1 sen and the result turn out to be bronze. Another Penang sifu said it is a copper since everyone said so except for Steven Tan. If majority said it is true, it might be true until proven otherwise. For me, the explanation given by both of the sifus are not enough.


This week, I try to meet Sifu Dickson Niew but I am a bit busy and cannot find time to meet him. Yesterday, I had a chance to talk with him via phone and ask him about the 1976 1 sen and the information about bronze 1 sen that I found in Steven Tan book. Here are his response:
"The 1 sen 1976 Transitional error coins are authenticate by Malaysia Numismatic Society as a copper. Bronze color is different from copper, you can look at the old Straits Settlements 1 cent for bronze color. Regarding the information provided by Steven Tan catalog, I myself has told Steven Tan many times about the wrong information. He said he has been given information about 1 sen 1976 bronze in all his catalog for over 10 years and nobody complaining. I cannot do anything about that but at least we already tried telling him that there is a mistake in his book."


I think the explanation by sifu Dickson already enough to answer our question; rare 1976 1 sen copper or bronze?