lunaticg 4:12:00 AM
Many of my friends and families has been asking when will the new coins start circulate. Some were asking is it possible to have a new currency for Chinese New Year? Bank Negara Malaysia (BNM) has just released a press statement about this matter. The new Malaysia coin will start circulate 16 January 2012 onwards. Members of the public will be able to obtain these new coins through their normal business transactions. You don't need to rush to your nearest bank to change for the new coins. 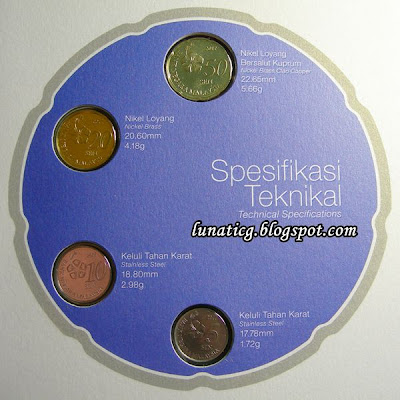 The new coins to be introduced into circulation in phases are legal tender and will co-circulate with the existing series. The existing series will be gradually phased out. That's mean you can still use Parliament and bunga raya series coins. For collectors, any Parliament or Bunga Raya series coins will be keep in a special drawer. In ensuring a smooth transition to the new coins series, machine vendors had been given sufficient time to calibrate their machines to accept these new coins.

The new coins are smaller and lighter making it more user-friendly for the public. The yellow and silver coloured coins enable the public to easily distinguish the different denominations. The edged designs and the different sizes will facilitate the visually impaired to identify and differentiate the denominations. In addition, latest advancements in minting technology which incorporates improved counterfeit resistance security features are embodied in the new coins series. The new metal alloy used for minting has enhanced durability against wear and corrosion.

For Malaysia New Banknote, it will only start coming into circulation in the middle of 2012.

New coin circulate 16 January 2012 lunaticg 2012-01-10T04:12:00-07:00 Many of my friends and families has been asking when will the new coins start circulate. Some were asking is it possible to have a new curr...
Malaysia ringgit
World News