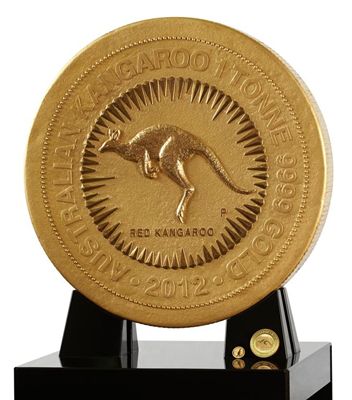 Perth Mint 1 tonne gold coin, 1 tonne Gold Kangaroo coin, measures nearly 80cms wide and more than 12cms deep, weighing a massive 1000 kilograms of 99.99% pure gold. The first 1 tonne gold coin by Perth Mint is certainly the most valuable gold bullion coin in the world with a market price of gold right now, it has a USD$55 million price tag on it. The coin is legal tender in Australia. The coin reverse shows a bounding red kangaroo surrounded by stylized rays of sunlight and bordered by the inscription AUSTRALIAN KANGAROO 1 TONNE 9999 GOLD and the year-date 2012. Read More. 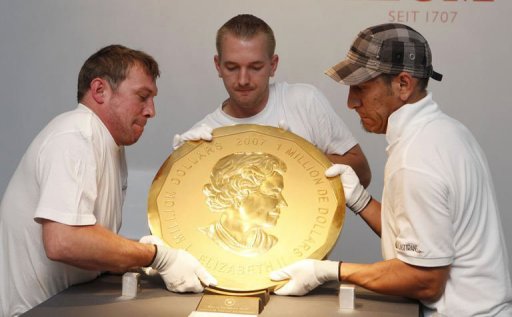 Photo by Reuters: It need 3 men's to lift up the coin.
On May 3, 2007, the Royal Canadian Mint (RCM) unveiled a 1million Gold Maple Leaf coin by artist Stanley Witten, with a face value of $1 million Canadian dollar. The weight of the coin is 100 kilograms, and measures 50 cm in diameter by 3 cm thick. The coin is mainly a promotional product to give the RCM a higher international profile. The 100-kilogram coin was conceived as a showpiece to promote the RCM's new line of 99.999 percent pure, one-ounce gold maple leaf bullion coins. The coin is made only to order and so far five have been produced. It is not 'struck' like a conventional coin, but is instead cast then machined to the right size and shape. Read More.


The 31 kg (68 pound) "Big Phil", which was made to honour the Vienna Philharmonic Orchestra, a €100,000 gold coin, worth about C$153,000. The Austrian coin is 37 centimetres across and weighs 31 kilograms. It is minted by the 800-year-old Austrian Mint, each with a face value of 100,000 euros and bearing a replica of the Vienna Philharmonic Orchestra's famed hall on one side and orchestral instruments on the other. (Hence the nickname Big Phil). With only 15 of the coin minted so far. The Big Phil were introduced in 5 October 2004.