Who invented the ATM Machine?

lunaticg 3:59:00 PM
Do you know who invented the ATM Machine? An automated teller machine (ATM) help us withdraw money without the need for a cashier, human clerk or bank teller. The inventor, John Shepherd Barron passed away at the age of 84 on 15 May 2010 after being treated for a brief illness at a hospital in northern Scotland. The first of these machine that was put into use was by Barclays Bank in Enfield Town in North London, United Kingdom, on 27 June 1967. This machine was the first in the UK and was used by English comedy actor Reg Varney, at the time so as to ensure maximum publicity for the machines that were to become mainstream in the UK. 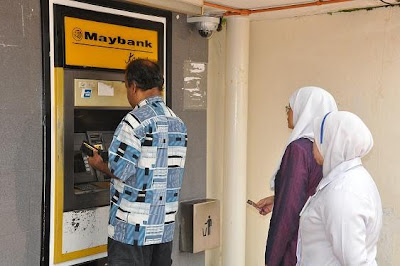 Shepherd-Barron once explained that he came up with the idea of cash dispensers in 1965 while lying in his bath after finding his bank closed. It was then his habit to withdraw money on a Saturday, but on this particular weekend he had arrived one minute late and found the bank doors locked against him.

"It struck me there must be a way I could get my own money, anywhere in the world," he said in a BBC interview in 2007 to mark the ATM's 40th anniversary.

"I hit upon the idea of a chocolate bar dispenser, but replacing chocolate with cash."

He later sold his concept for an automatic teller machine, now known as an ATM, to Barclay’s Bank more than 40 years ago.

With plastic bank cards bearing magnetic strips still to be invented, Shepherd-Barron's early machines used special cheques that were chemically coded by being impregnated with carbon-14, a mildly radioactive substance. Customers placed the cheque in a drawer, the machine detected the material and matched the cheque against a PIN before paying out a maximum of £10 a time. "But that was regarded then as quite enough for a wild weekend," he noted.

As part of his work in developing the self-service ATM, which would dispense banknotes 24 hours a day, seven days a week, Shepherd-Barron also came up with the idea of a four-digit PIN, which subsequently transformed the way people across the world handle financial transactions.

Recalling his Army number, he had originally intended to make personal identification numbers (PINs) six digits long, but reduced the number to four when his wife, Caroline, complained that six was too many. "Over the kitchen table, she said she could only remember four figures, so because of her, four figures became the world standard," he recalled. 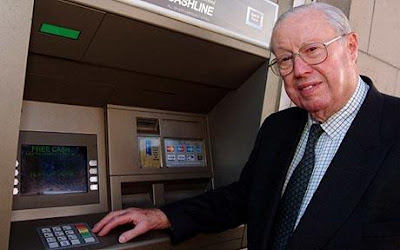 Photo by Bobby Nelson: John Adrian Shepherd.
John Adrian Shepherd-Barron was born on June 23 1925 at Shillong (now Meghalaya) in the Indian province of Assam. His Scottish father, Wilfrid Barron, was chief engineer of the Chittagong Port Commissioners and subsequently chairman of the Port of London Authority and president of the Institute of Civil Engineers; his mother, Dorothy Shepherd, was an Olympic tennis player and Wimbledon ladies doubles champion. In 1950 he joined the De La Rue firm of stationers and banknote printers as a management trainee, and worked his way up as what he liked to call an "innovative entrepreneur", focusing on the supply of systems and services to the international banking industry. In 1953, he married to Caroline Murray, the daughter of a former chairman of the Bank of Scotland, who survives him with their three sons.
He did not make any money from what became one of the greatest advances in banking convenience. But for his services to the industry, and his work on ATMs in particular, he was appointed OBE in 2004 – 40 years after his invention. He was also presented a lifetime achievement award by the international ATM Industry Association and was later the first chairman of Ross and Cromarty Enterprise.
Source: Telegraph.co.uk, Al-jazeera.net.