Brasher Doubloon owner at the center of lawsuit

lunaticg 6:31:00 PM
Do you still remember about the Brasher Doubloon first gold coin made in the United States? The owner of the coin is at the center of lawsuit by Rare coin researcher William Swoger. The co-owners of the Brasher Doubloon, Steven L. Contursi of Laguna Beach, California, President of Rare Coin Wholesalers of Dana Point, California, and Donald H. Kagin, Ph. D., President of Kagin's in Tiburon, California. Plaintiff says the owners of a Brasher Doubloon reneged on a deal to pay him for information that he says shows the coin was the first made under the new U.S. government -- which would boost its value to $10 million. 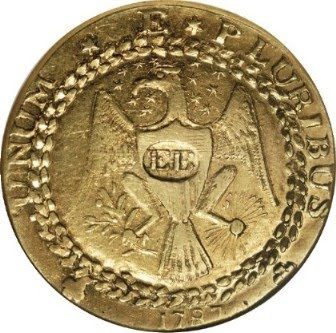 The Brasher Doubloon is steeped in historic reverence and mystique. It dates to Colonial America and the dawning of the new federal government, when Spanish gold doubloons circulated alongside other foreign gold and silver as part of New World commerce. The coin takes its name from Ephraim Brasher, a respected New York City gold- and silversmith who lived next door to George Washington. In 1787, Brasher began making gold coins, presumably to be used as currency for the soon-to-be-formed republic.

Seven of them remain and are sanctified as the first truly American gold coins. That fact, along with their distinctively American design and Brasher's friendship with Washington, attached a permanent legacy to the coins. The coins are nearly identical, but one of them is first among equals. And it is that coin, worth $15 when Washington was president but most recently sold for nearly $3 million, that is at the heart of a lawsuit filed in Orange County Superior Court. Rare coin researcher William Swoger says he told the coin's owners that he had "specialized information" about the coin and that they reneged on finalizing a contract to pay him in exchange for the information. 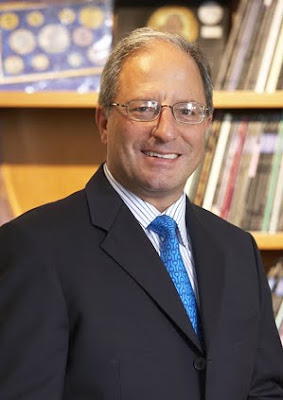 Swoger's lawsuit alleges that he approached Kagin and Contursi several months ago and told them the coin was worth much more than they realized. The key, he told them, is that the coin wasn't the first of the seven struck by Brasher beginning in 1787. Contrary to the prevailing view in numismatic circles, Swoger says it was the last, and probably not struck until 1793. That later date is crucial, Swoger says, because this coin was fractionally heavier than the others and made to conform to a 1793 act of Congress that established weight standards for gold coins in the new republic. The other six coins are of identical weight and predate the formation of the new government, he says.

According to the lawsuit, Swoger informed the owners that he had discovered information that would make their coin much more valuable and asked for a $500,000 fee. They countered with $250,000, the suit alleges, and then asked for a meeting at which Swoger would disclose the information. Swoger met with Kagin, explained his thesis and was given a gold coin valued at $35,000 as a down payment, the suit alleges. Swoger alleges Kagin said he and Contursi would prepare a contract but never did. Swoger is suing for millions of dollars in damages. 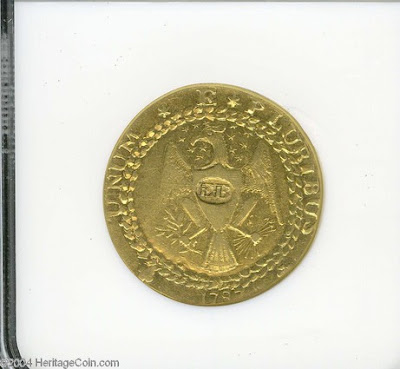 One side of the rare Brasher Doubloon features an eagle with wings spread, holding an olive branch in one talon and arrows of war in the other. Of the seven existing coins, this is the only one that has "EB" -- the artist's initials -- stamped on the eagle's shield. 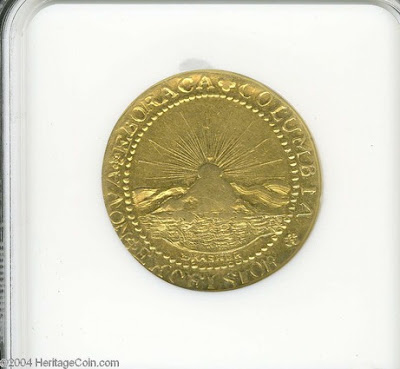 One side of the Brasher Doubloon features a sun setting behind mountains and the sea. Of the seven nearly identical coins, six have "EB" stamped on this side.

In an interview, Swoger, who is 65 and lives in Lake Odessa, Mich., said he is confident he can prove the coin was the last in the series and not the first. He declined to provide details. His attorney said an ad in a 1790s New York newspaper spurred Swoger's research about the sequencing of the doubloons. Swoger acknowledged that but said learning the exact weight of the historic doubloon -- that it was slightly heavier than the others in the set -- was what led him to conclude it was struck after the others and linked to the congressional act.

The lawsuit alleges that Swoger's theory would elevate the coin's value to $10 million.

"If I'm wrong and they can prove me wrong," Swoger said, "they owe me no money for the information. If my information is correct, it gives much more importance to Ephraim Brasher himself and his other gold coins, because it gives him a longevity that was not known before."

The lawsuit is an uncommon event in the world of rare-coin collecting, but there's no doubt that the Brasher Doubloon is fertile territory for intrigue.