lunaticg 6:08:00 AM
In the International Coin Design Competition (ICDC) 2015 article that I wrote, I mention Ismail Ibrahim, who has won 3 times in the competition. Upon searching further I found out that Ismail Ibrahim is a Master Designer during Royal Mint Bank Negara era. 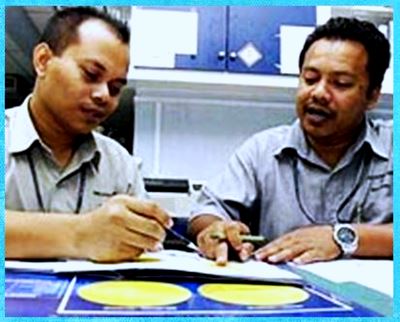 His story shared by The Star, May 15, 2006, which tells the story of Malaysia’s Coins in Education (CIE) programme, endangered marine animals and reptiles.

Here are the original article by Star Reporter, S. INDRAMALAR:

LEARNING by way of a coin? Under Bank Negara Malaysia’s Coins in Education (CIE) programme, Malaysians will get to learn about various endangered species and collect unique commemorative coins all at the same time.

This year, the central bank is issuing commemorative coins on the country’s endangered marine animals and reptiles. About 20,000 coins will be minted for each issue (there are 12 issues or types for the marine series) and are aimed largely at schoolchildren to encourage them to become coin collectors while appreciating the country’s endangered animals.

The Royal Mint, the country’s sole minter of coins and medallions, designed and produced the coins, which are made of Nordic gold alloy (a material unique to the CIE programme) and have a face value of 25 sen. They are, however, being sold to the public at RM5.50 each.

Says Syed Ihsan Syed Itam Ismail, General Manager (administration and business development) at the Royal Mint: “The coins in the CIE series are unique simply because of their 25 sen face value. Malaysia does not have a 25 sen currency in circulation so, as legal tender, this coin is unique”.

The 12 coins in the endangered marine animals and reptiles series will be released every month. The first two – featuring the Green Turtle and the Hawksbill Turtle – were released last week.

Other coins in the series include the Bottlenose Dolphin and Painted Terrapin coins (to be released at the end of May), the Olive Ridley Turtle and Leatherback Turtle coins (June), the Dugong coin (July), the Siamese Freshwater Crocodile (August), the Whale Shark (September), the Malayan Gharial Crocodile (October), Estuarine Crocodile (November) and the Irrawady Dolphin in December.

The Royal Mint’s team of designers designs the coins, lead by “master designer” Ismail Ibrahim, who has for three years running, emerged among the top three at the International Coin Design Convention in Japan.

Most recently, Ismail bagged the second prize with his coin design themed Force of Nature at the 2005 competition.

“Factors that have to be taken into consideration when designing the coins are the aesthetic and educational value of the designs. Also, our designers have to work within the constraints of the coin surface and colour of the material used. The size of the coin does not allow for that much detail to be included,” says Syed Ihsan.

The Mint designers consult both the Department of Wildlife and National Parks and the National Zoo for their input. (The Endangered Species coin series was first introduced in 2003 with the “land animals” and “birds” themes.)

After the coins are designed by Ismail and his team, they are passed over to a special vetting committee under Bank Negara Malaysia for appraisal and approval.

“Sometimes we have to do some modification to our design, sometimes we don’t. It really depends,” says Syed Ihsan.

The coins come in attractive and colourful coin cards which contain information on the respective endangered species.

The designs for the coins are usually ready six months before they are due to be issued, to allow for modifications.

Although one of the main aims of the CIE initiative is to increase awareness and knowledge about endangered species among students, Syed Ihsan admits that the Mint has not assessed the success of the initiative.

“That is one area we hope to improve on. We have not gone out to find out how effective the coins are in promoting awareness among students. We will, however, be more aggressive, both in promoting the coins and assessing their effectiveness this year.

Master designer at the Royal Mint Ismail Ibrahim (right) works closely with sculptor Norhisham Jusoh in designing and producing Bank Negara Malaysia’s commemorative coins.
“We hope to, among other things, reach out to more students through student co-operatives in the respective schools but for that we must first obtain approval from the Education Ministry,” says Syed Ihsan.


Hopefully, Bank Negara Malaysia will start to recognize the designer of Malaysia Coins by at least mention who is the designer on the certificate of authenticity (COA) for a new coins. Maybe they also can publish a desginer list for previous coins. It may not mean anything to Bank Negara management, it is some of the most important history for numismatic community.