The coin from the The Donald G. Partrick Collection were sold in a special session held by Heritage Auctions as part of the official auction of the Florida United Numismatists (FUN) Convention at the Orange County Convention Center in Orlando, FL.


"There are not enough superlatives to describe how extraordinary this collection is," said Jim Halperin, Co-Founder and Co-Chair of Heritage Auctions. "It is, quite simply, the finest grouping of American colonial coins ever assembled and the numismatic world will never see another like it. This is a pedigree that will endure in perpetuity and, judging by the incredible prices and the very spirited bidding, the top collectors in the hobby fully understood that." 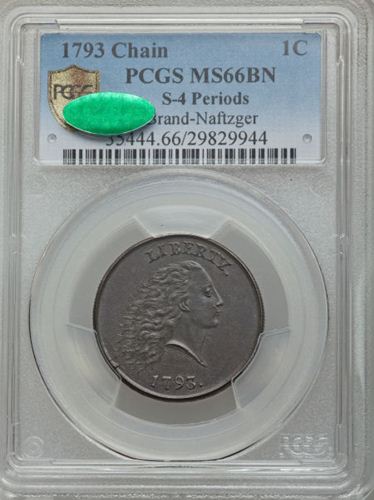 "This copper cent is about as large as a modern quarter-dollar. It is quite rare because the controversial design on the back was quickly changed soon after production of the coins was started in March 1793 at the Philadelphia Mint," explained Greg Rohan, President of Dallas, Texas-based Heritage Auctions.


"It's called a 'Chain Cent,' because the tail's side design prominently shows a chain with 13 linking rings to symbolize the unity of the original 13 colonies. However, critics at the time claimed it evoked an image of slavery, so the design was quickly changed with a wreath replacing the chain," said Rohan.


"Bidding for the 1793 Chain Cent opened at $1, and the winning bid of $2,350,000 is a world's record for any penny. There were gasps and then applause from the more than 100 people attending the auction when the bidding ended. The buyer was not present, though. He's a long-time, avid coin collector who wants to remain anonymous, and he placed his bid online," revealed Rohan.