lunaticg 7:01:00 AM
A very rare Malaysia coin, 1970 1 sen copper clad steel coin will be offered by Collectibles Auction Asia (CAA) in their Coins & Banknotes Auction 4/2014. The auction will be held at Landmark Village Hotel, Singapore on October 4th, 2014. 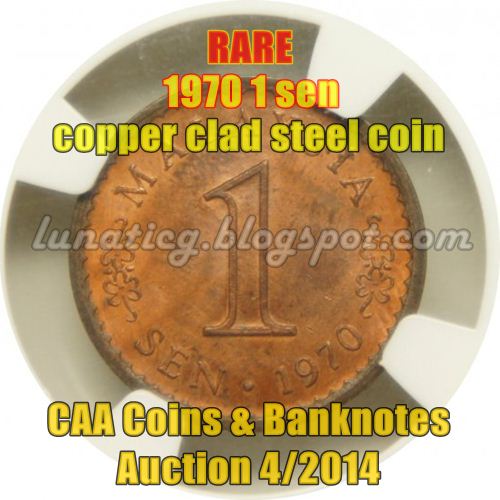 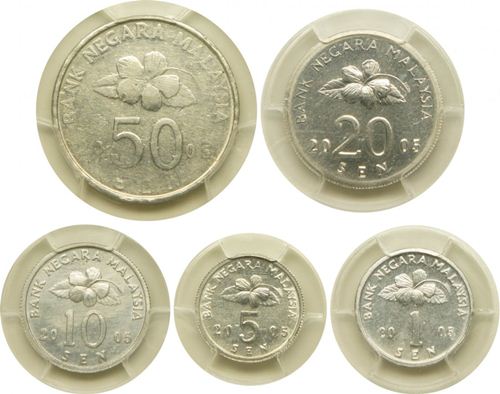 There are also other lots with bunga raya aluminium planchet coins offered in the auction:

Another coin that might be a highlight piece in the auction is a 50 sen 1969 Parliament without a security edge (Milled Edge), the finest known with a MS65 grade by The Numismatic Guaranty Corporation (or NGC), a Wong Hon Sum Collection. The beautiful coin have an estimate of SGD2,500 – SGD5,000.


For your information, a 1968 50 sen Milled Edge realized SGD7,670 (RM19,942) including buyer premium in CAA Auction No. 3/2014 on 19 April 2014. The ex Mr. Wong Hon Sum coin is still the most expensive Malaysia circulation coin sold in auction and the best finest known example (graded MS66) for the 1968 50 sen Milled Edge coin. A 50 sen 1969 Milled Edge coins are more difficult to find as there are only 2,000,000 pieces minted for that year. Will the final auction price for this coin hit a higher price then its older brother? It is a question that I think everyone will be waiting for on 4th October 2014. With a recent price drop for most of the rare Malaysia coins in other auctions, I think it will be a very exciting day for Malaysia numismatic.


To anyone who still don't understand what is Milled Edge and what is security edge, which one of the two give a higher price, you can read my article; Information about 50 sen 1967, 1968 & 1969 coins. 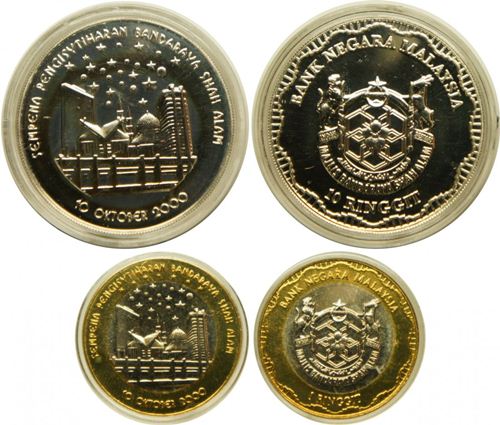 A 2 in 1 set of Proclamation of Shah Alam commemorative coin will also be offered in the auction lot 464. The RM 1 Bi-Metal (Copper-Nickel & Nordic Gold) and RM 10 Silver coins set came in a standard Bank Negara Malaysia blue case with cert. The coin set is estimated at SGD1,200 – SGD5,000. For your information, there is no official record by Bank Negara Malaysia about the coin set.

Other highlights for the auction:

A Buyer's premium of 15% will be added to hammer price for each lot to all succesful bids. Lots sold though "liveauctioneers.com" are subjected to an additional 3% Buyer's Premium (18% in total). All Shipping, handling and insurance charges will be paid by Buyer.