lunaticg 9:53:00 AM
I don't know why Malaysian are very easy to believe in scam. Most probably because of promise of high return. I had been sharing so many thing about currency related scam in here but they're people who still want to believe that what I tell them are nothing but a lie. Yesterday, a reader email me asking me if 1 million US dollar banknote ever exist. When I told him that United States never issued a million dollar bill, he scold me. He said I am not a US Citizen and I don't know anything about US currency. He also said he already show that notes to one of his bank employee friend and he said it maybe a genuine notes. I believe he is mad because I smash his dream of becoming an instant millionaire, the truth hurt. 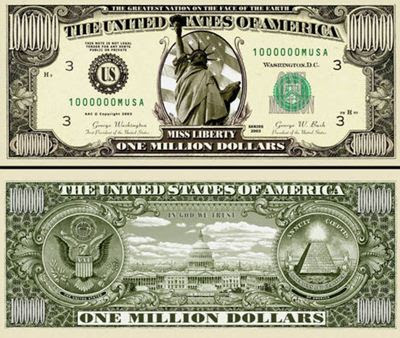 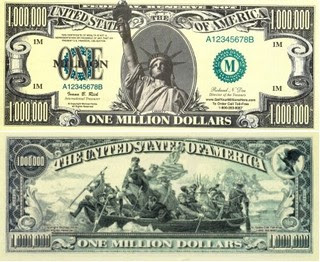 Yes... It exist if you want to talk about novelties and fantasy banknotes. US Federal Reserve never issued any million dollar banknote. However, Federal Reserve has declared 1 million novelties and fantasy banknotes legal to print or own and does not consider them as counterfeit because no genuine million dollar bill exists or ever has existed. At least one vendor printed the bills using the same intaglio printing process and cotton rag stock as actual currency, using the American Bank Note Company as their printing contractor.

The highest genuine US banknote that ever existed are the USD$100,000 note but it is not for public circulation. They were used only for transactions between the Federal Reserve and the Treasury Department. The $100,000 bill featured a portrait of Woodrow Wilson. They're also people who are using that notes to scam others, saying that the notes are from old stock and not many people knew about the USD$100,000 bill. You can read more about the scam story, here; 1934 $100,000 Dollars scam.

Do any of you remember Elie Youssef Najem, Lebanese self-proclaimed billionaire who want to donate RM1bil to the National Cancer Council (Makna) in 2006? He were caught by police at a four-star hotel in the Bukit Bintang area in January 2010 for a possession of US$66mil (RM220mil) in fake money. A Kuala Lumpur commercial crime unit division police team led by Insp Ridhwan Ani raided Elie’s room and discovered a leather bag containing 60 “US$1mil” bills, 60 “1934 US$100,000” bills and 40 “US$500” bill which added up to US$66.2mil. He had apparently tipped one of the cleaners with a US$500 note. The woman, ecstatic over the windfall, went to a money-changer nearby to convert it to ringgit. Instead, she got a shock when told it was fake. She complained to her supervisor who then alerted the police. You can read more about the story in here; Fake Lebanese Billionaire caught using fake US dollar notes.

Other news about 1 million bill

In early January 2011, a German pensioner down on his luck has been given a six-month suspended jail sentence for attempting to cash a million-dollar bill at his local bank. Wolfgang U., 65, whose business reportedly ran into difficulties after he became ill, brought the fake note to the bank in Ratingen, western Germany, saying he had received it in return for the sale of a property in Sri Lanka. You can read more about it here; German tries to cash million-dollar bill.

1 million dollar banknote lunaticg 2012-08-05T09:53:00-07:00 I don't know why Malaysian are very easy to believe in scam. Most probably because of promise of high return. I had been sharing so man...
America
Counterfeit
Scam