lunaticg 8:35:00 PM
They're many myth out there about Malaysia coins and banknotes. People want to believe that myth mostly because they don't have enough knowledge about Malaysia Numismatic or their friends told them about it. Some of the story make this hobbies interesting to non-collector but most of the myth will make you lose money/profit in the end. Its up to you to believe the reality or the myth but in the end, you need to to go back to reality since most real collector will not follow any myth story. We just listen and laugh out laud in our heart because we knew the myth ain't real. I don't asked you to believe what I am sharing in here but this are the top 10 myths in Malaysia Numismatic. 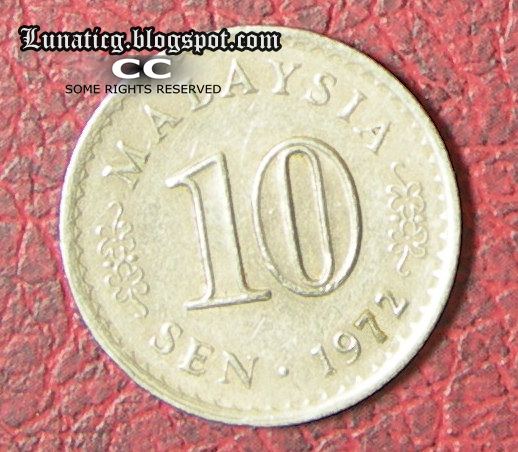 Few years back, they're many people who are asking me about RM500 signed by Tun Ismail Mohd Ali. They said only a few piece of the notes exist and it is a very rare piece. When I post my RM500 for sale, many people contact me about that notes. Even when I said to them that they're no RM500 in Tun Ismail Mohd Ali era, they keep on insisting to meet me and want to see that notes. Most of them are just a middlemen who are trying to make an instant profit because someone said they will pay a big amount of money for that notes. Some even argue with me why they're sa-ribu banknotes exist but BNM don't print any RM500. Some even told me that BNM don't want people know RM500 by Ismail exist because the price will be going up if everyone are looking for it.

They're no coins minted by BNM in 1972, you can read and check about it in my post; No issue Malaysia coin according to year (duit syiling tiada keluaran mengikut tahun). If you found any coins in that year in any blog, its a fake/counterfeit. They either altered an original coin or make a new coin. You can even do it yourself with a photoshop software, you can read it in my 10 sen 1972 post. Most of the fake coins are offered by people who involved in mistic/shaman (perbomohan). Some even dare to claim that the coins came from sky or "alam bunian" and it promise to give the owner instant profit. Most of the time, the price of the coins can go to 5 figure.

I don't know why people can believe this notes even exist since they remove Zeti signature (you can still see the zeti print mark under close inspection on the notes) and print Ali Abul Hassan (Aishah) signature on that notes. I know one friend bought this notes for RM15,000.00. It is a waste of money since that notes are fake because BNM never issued any side sign RM1 with Ali Abul signature. Another funny thing is that BNM never take any action with these counterfeiter. Maybe because the buyer themselves never report it to police or BNM. It is a huge profit for them because it only cost them below RM10 to make the counterfeit banknotes.

5. Duit Syiling freemason-New Malaysia 10 sen 2012
Some stupid bloggers out there are sharing a story about new Malaysian 10 sen coin motif on the reverse look like a Star of David in Israel flag. The funny thing is that they altered the coin motif to make it look like Star of David. It show how they are eagerly want to create a controversy from nothing. BNM has released a statement that it is the motive of the Orang Asli (taken from a form of decorative woven Aboriginal Malaysia), you can read more about their statement here; BNM reply on new duit syiling issue.

Funny but they're also rumour out there that they're gold in 50 sen 1967, 1968, 1969. That is why the price of some of the coins can go up to thousand ringgit. The rumour certainly came from non-collector who don't know anything about numismatic. They're no gold in 50 sen security edge and the reality is collector pay a high price for a coin without a security edge for that particular years because they're hard to find/rare. If they're gold in that coin will you think the buyer gain any profit paying a high amount of money for that coin?

They're also rumour that RM50 with Merdeka logo can be exchange for RM100 at the nearest commercial banks or Bank Negara. The truth is you can only get face value if you want to exchange old banknotes at any Bank Negara branches, you can read it here; Tukar duit lama di BNM. Many non-collector believe the logo is special and it can give them a high return. If you want to get a profit from the RM50 merdeka, keep UNC notes and wait for 50 years. I believe it will be a rare item during that time especially if BNM make another RM50 100th years Merdeka banknote. Find a notes with a match number pair and you can earn more then the notes face value. For now, you can only exchange it with face value but most of the time, bank will not accept exchange since the notes still can be use.

When I am in Sabah a few months ago, they're people who telling me story that the price for AA prefix Malaysia banknotes can get you RM300 a piece. That person show me a bundle of his Malaysia banknote with AA prefix. Most of the banknotes are in circulated condition. I told him that people paying RM300 for a premier set of new 4th series Malaysia banknote issued by BNM for RM300. The notes came with AA prefix (only RM50 with AAA prefix) with the same number. You can get a high price for AA prefix notes if you can get a UNC condition notes but the price will not go to RM300 a piece yet.

Top 10 myths in Malaysia Numismatic lunaticg 2012-05-22T20:35:00-07:00 They're many myth out there about Malaysia coins and banknotes. People want to believe that myth mostly because they don't have eno...
Banknote
Blog
Malaysia ringgit
Rare