lunaticg 9:39:00 PM
I am reading a blog post by sifu Dickson Niew just now; COUNTERFEIT 20 CENTS COIN IN MALAYSIA THIRD SERIES, about Guan Ming Daily report on new third series 20 cents coin was found in Perai, Penang. In that report, Miss Tan, who found that coin said the surface of the coin is very rough, design elements were very poor,colour of the coin was rather dulled. She claimed that the golden colour coating on the counterfeit coin can be easily scraped with finger nails. One question that come into my mind when I reading the news, do the reporter do some research before posting that news? I don't think so, because he/she don't asked any expert opinion in the report. It is just an assumption by a reporter who want to find a good news. 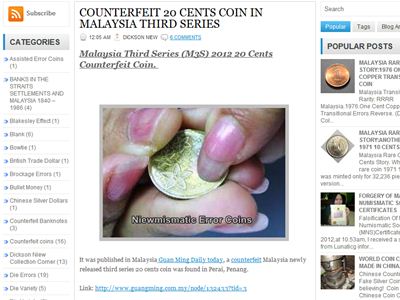 "I personally doubtful on the claims, because by logic, in terms of profit return it is more economical and profitable to produce a counterfeit new coin with 50 Cents denomination then the 20 Cents. If these counterfeiters/caveat emptors produce 20 Cents counterfeit coins, it has to produce a lot of coins in order to have enough of profit to share among them. Their cost of production has to be very low so that they can have a good margin as incentive to pay the runners to do marketing! Likely, this is a piece of original 20 Cents coin, it was placed in a very corrosive environment,thus caused the damage to the nickel brass coating of the coin. Best way to check its authenticity is by weight, anything different from the original weight of 4.18gm is questionable!"


For anyone who still don't know Sifu Dickson Niew. He is one of the committee members of Malaysia Numismatic Society (MNS) and expert in Malaysia coins counterfeit. He collect counterfeit coins to study and understand how counterfeiters are doing their job. Recently, he and another MNS committee members, Lawrence De Souza, feature in Kosmo news about latest MNS Auction last March; Dickson Niew in Kosmo. If Guan Ming Daily reporter are to far from Sifu Dickson, he/she can also contact Bank Negara first before make an assumption and share a false report in daily news.