lunaticg 11:52:00 PM
New 10 sen related to Israel flag? I had been reading blogs all day yesterday searching for Malaysian response to Malaysia new coins. Its a little bit shocking when I read a blog saying that the new 10 sen Malaysia coin design, look like an Israel flag symbol, blue Star of David. I am laughing looking at their post. How Malaysian just love to create a shocking story about everything. Its a trend now, anything that look like something that related to Israel or Freemason will be an issue in Malaysia. Last time they said BNM logo come from Pharoah dog. Another funny thing is that he draw the Star of David on the 10 sen coin, to make it look like the Judaism symbol. BNM Official reply on 10 sen orang asli motif resemblance Israel Star of David; BNM reply about new duit syiling issue. 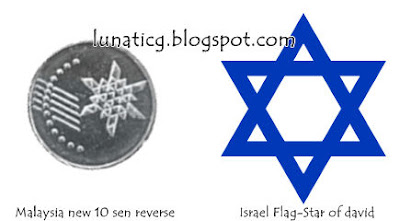 To anyone who still don't know, Israel and Malaysia don't have any diplomatic relationship. Malaysia government don't allow any Israel flight, Publication or any Israel materials into this country. Israel has no diplomatic relationship with 36 United Nations Country and most of it are from Muslim country. Most of the country don't recognize Israel as a state/country.

Israel has started using the flag of Israel, depicting a blue Star of David on a white background, between two horizontal blue stripes on 28 October 28 1948. The Star of David, known in Hebrew as the Shield of David is a generally recognized symbol of Jewish identity and Judaism. The hexagram has been in use as a symbol of Judaism since the 17th century. 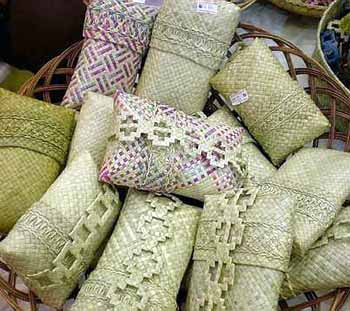 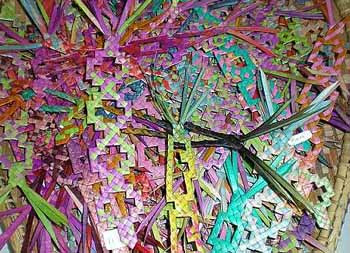 On the new 10 sen coin, the design that look like a hexagram is exactly a weave pattern of the orang asli, Mah Meri tribe. Most of the orang asli (aboriginal tribes) live in Pulau Carey, Selangor. I had seen that pattern before when I visit orang asli village in Pulau Carey. You can buy their hand-woven craft (kraf anyaman tangan) in many Malaysia craft shop. They make mats, bookmarks, small bags, handbags, hats and baskets. Most of their hand-woven craft are made from Mengkuang and pandan leaves.

The design of the orang asli motif doesn't even look close enough with Israel blue Star of David design. To all Malaysian blogger out there, if you want to create an issue, make sure you don't change or alter the fact. To all my blog readers, you can Google "Duit Syiling Malaysia+Israel". Saying that the orang asli motif on the 10 sen coin related to Israel is an insult to orang asli themself and Bank Negara Malaysia (BNM). BNM had done a good job on producing a new Malaysia coin design. I heard the commemorative coins in Sabah BNM has been sold out.

Share with me your opinion. Do you think the new 10 sen design related to Israel flag?