lunaticg 9:58:00 AM
Royal Canadian Mint had been releasing British Columbia Coat of Arms gold coin for 2010. Only 500 pieces of this $300 dollars will be minted by the mint for worldwide circulation and it will be shipped at the end of April 2010. The original Coat of Arms of British Columbia was granted to British Columbia by a Royal Warrant of King Edward VII on March 31, 1906. This is a fifth issue in this series of 14-karat gold bi-annual coins. Coats of arms originated in the Middle Ages. They could only be granted by the king, a tradition that led to an intriguing story for the Coat of Arms of British Columbia (BC). While the province requested a coat of arms in 1897 and a Provincial Shield was granted in 1906, the official arms were not granted until 1987, some 90 years later. 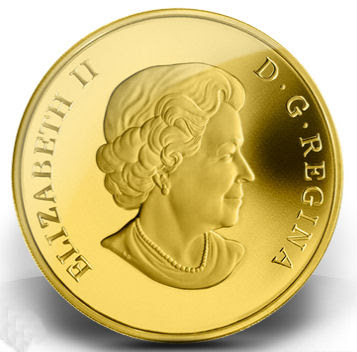 Highlights: This series of 14-karat gold coins provides a unique portrait of Canada, made all the more collectible with a limited mintage of just 500 coins for this latest issue. With a fascinating history and unique status as the first provincial arms to include the Royal Crest, this coin is an absolute must for collectors.

Reverse: A faithful reproduction of BC’s Coat of Arms, the first arms to be granted the Royal Crest. It appears above the Shield with one distinguishing mark; the lion features a garland of dogwoods, BC’s floral emblem. Below the Crest is the golden helmet of sovereignty with other heraldic elements. The elk and bighorn sheep represent the former colonies (Vancouver Island and mainland respectively) while the wavy lines in the Shield reflect BC’s location between the Pacific Ocean and the Rocky Mountains. 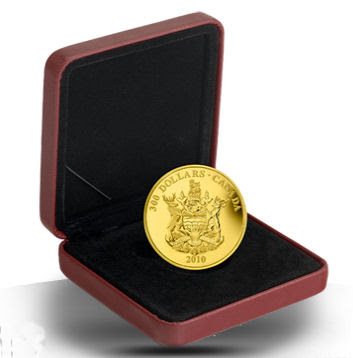 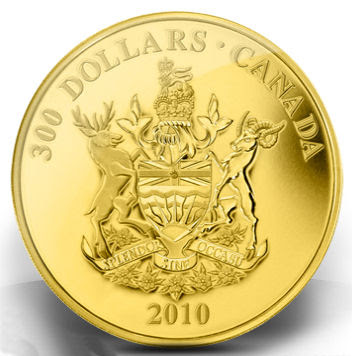 Crest:
The crest is the Queen's royal crest (a gold lion statant gardant—standing on all fours and facing the viewer—wearing the royal crown), difference with a garland of Pacific Dogwood, the provincial flower.

Shield:
The shield features a Union Flag in chief, with a crown (known heraldically as an antique crown) at its centre. In base it has the sun setting into the ocean, representing the province's location on the Pacific.

Compartment:
The compartment is a garland of Pacific Dogwood.

Supporters:
The supporters are an elk stag and a bighorn sheep. The wapiti of Vancouver Island and the bighorn sheep of the mainland of the province symbolize the union of the two colonies which united to form British Columbia in 1866.

Motto:
The motto Splendor Sine Occasu, is written in Latin and essentially means "splendour without diminishment" or "beauty without end."