lunaticg 1:59:00 AM
Every year, Isle of Man will release the special '12 Days of Christmas' Gold Angel. The limited-edition 2009 coin is the sixth in the series, so it bears a custom privy mark on the reverse featuring 'Six Geese A-Laying'. The Gold Angel is already one of the world's premier gold bullion coins, but the 2009 privy mark is added to only a very small number of coins. Each beautiful and historic gold coin is protectively encapsulated and presented in a handmade case with a certificate of authenticity.

The Reverse design featuring Michael slaying Satan represented as a dragon. Micheal is an archangel. He is viewed as the field commander of the Army of God. St Michael is represented as an angelic warrior, fully armed with helmet, sword, and shield (often the shield bears the Latin inscription: "Quis ut Deus?"), standing over the dragon, whom he sometimes pierces with a lance. He also holds a pair of scales in which he weighs the souls of the departed or the Book of Life, to show that he takes part in the judgment. 'Six Geese A-Laying' is part of the carol of twelve days of Christmas. 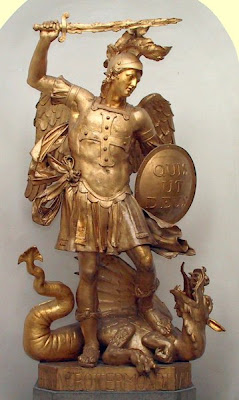 Wikipedia Photo: St Michael the archangel, about to slay the devil

This Christmas Angel gold coin is a Legal tender coin of the Isle of Man. Its Privy Mark identifies the special 2009 Christmas edition. With only 1,000 coin minted, this coin is considered as a limited edition. The coin is available in 1/20oz Proof Fine 999.9 Gold. The Obverse of the design featuring Queen Elizabeth II, Isle of Man 2009.

This will be a wonderful Christmas presents for everyone who loves gold! You can buy this fine Proof 999.9 Gold from Pobjoy Mint website for £79.50.