-->
Home World News BBC-History of the World in 100 Objects

BBC-History of the World in 100 Objects

lunaticg 5:52:00 PM
British Broadcasting Corporation and British Museum via BBC Radio 4 will aired a programmes A History of the world in 100 Objects. The programmes written and presented by Neil MacGregor - the Director of the British Museum. The programmes will be in 100 separate 15-minute programmes. Neil MacGregor will talks about a single object in the British Museum collection that can tell us about a host of different things. On how the object was made, its political, economic and cultural significance, how the object came to be the museum collection. MacGregor will use objects of ancient art, industry, technology and arms as an introduction to parts of human history. The series, four years in planning, will begin in 2010 and be broadcast over 20 weeks. 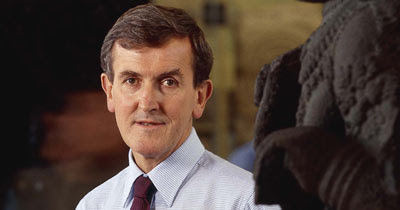 Gold coin of Croesus, c. 550BC, from modern Turkey.


Gold coin of Croesus, c. 550 BC, Modern Turkey. Photo: The Trustees of the British Museum


Due to his immense wealth, Croesus, king of the Lydian people who reigned from about 560-547BC, is thought to have been one of the first rulers to mint gold coins. Historians claim that the coin, called a croesid, depicting a lion and a bull, provides an insight into the earliest uses of currency.


Fashioned from fine-grained, green volcanic lava called phonolite, this is one of the best surviving examples of the hand-held cutting tools which were first made in Olduvai Gorge about 1.5 million years ago. They were still in use there some 500,000 years ago by which time their manufacture and use had spread throughout Africa, south Asia, western Asia and Europe. No other cultural artefact is known to have been made for such a long time or across such a huge geographical range.


In 1939, excavations at the Anglo-Saxon burial ground discovered this ornate iron helmet among treasure surrounding a man’s remains in a 7m oak ship. The level of craftsmanship, indicated by its decorative panels of tinned bronze inlaid with silver wire, signalled a radical shift in attitudes towards early Saxon society, which until then was though to have been substantially less sophisticated than the Roman period.


An inscription inside this ritual food vessel has provided historians with an account of a crucial transformation period in Chinese history when King Wu established the Zhou dynasty after conquering the Shang dynasty around 1050 BC. The practice, also employed by the Shang, demonstrates how the new rulers used the old traditions to secure their legitimacy despite the social upheaval.


This serpent embodies both how the Aztec empire flourished and the story of their destruction. The turquoise that made up the serpent was probably given in tribute to the Aztec rulers by the subject peoples of their empire and helps show the tribute system on which their empire rested. It is possible that it was one of the treasures given by Moctezuma to Cortes.

In my opinion, this program will be a great way to educate public about a history of the world using antique to tell the story. but do people listen to radio nowadays for information like this? How Neil MacGregor will be presenting in the programmes? Do everyone know every pieces of items in the British Museum he will be talking about? Its not easy to describe an antiques items just with your voice. Just my personal opinion though. Wish I can hear what do you all think.