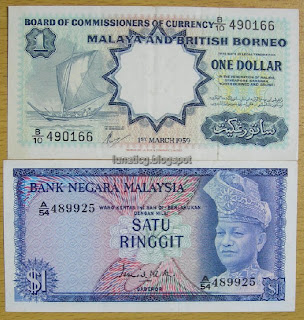 The Malay names ringgit and sen were officially adopted as the sole official names in August 1975. Previously they had been known officially as dollars and cents in English and ringgit and sen in Malay, and in some parts of the country this usage continues. For example, in Malaysia one ringgit is "one dollar" in English and "tsit8-kho·1" (蜀塊/蜀块) in Hokkien. In the northern states of Peninsular Malaysia, denominations of 10 sen are called kupang in Malay ("poat8" in Hokkien), e.g. 50 sen is 5 kupang. The use of the dollar sign "$" (or "M$") was not replaced by "RM" (Ringgit Malaysia) until the 1990s, though internationally "MYR" (MY being the country code for Malaysia) is more widely used. For more story about Malaysia ringgit symbol, you can read; Malaysia Ringgit; RM or MYR? 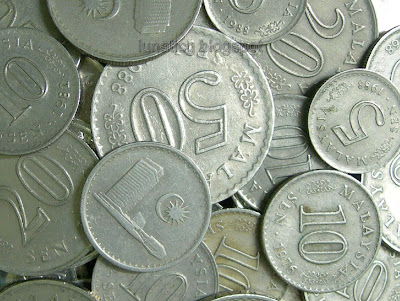 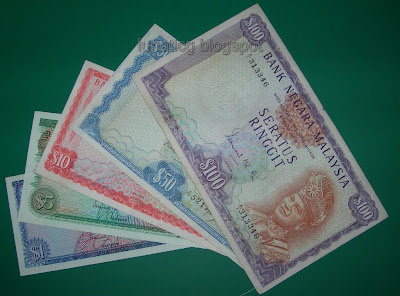 The first series of sen coins were introduced in 12 June 1967 in denominations of 1 sen, 5 sen, 10 sen, 20 sen, 50 sen, followed by the introduction of the 1 ringgit coin (which continued to use the $ symbol and is the largest coin in the series) in 1 May 1971. On the obverse of the coins show Malaysia Parliament building as a symbol of democracy. A crescent moon and 13 pointed star is taken from the flag of Malaysia, representing Malaysia as an Islamic nation and 13 states in Malaysia. The design for ringgit coin is a little bit different from other coins; crescent moon and the pointed star is bigger with 14 pointed star (13 states and a federal territory). On the reverse show the denomination printed in the middle and hibiscus, the national flower of Malaysia at the side. The coins were designed by Geoffrey Colley and you can find the sculpture "GC" in the front of the coin of this series, under the Parliament building.


Malaysia 1st paper money were released in June 1967 in $1, $5, $10, $50 and $100 denominations. The $1000 denomination was first issued in 2 September 1968. Malaysia paper money have always carried the image of Tuanku Abdul Rahman, The first Yang di-Pertuan Agong of Malaysia on the obverse of the banknotes. The reverse show Bank Negara Malaysia logo with geometric design on the background. All the banknotes have a tiger watermark. On 16 August 1972, BNM change the spelling system following the new Malay spelling system. For example, the word "SA-PULOH' was changed to "SE-PULUH". In 1976, a latent image of the numeric number appeared when the notes are seen at an angle, a new security features added on the new notes. 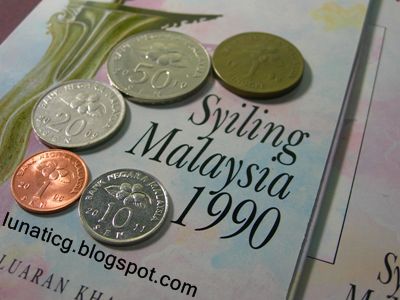 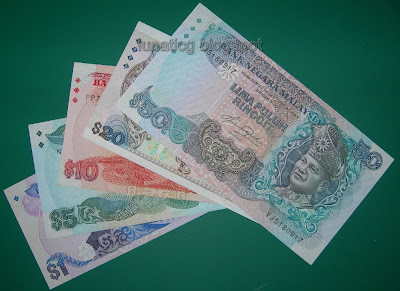 In 1982, 2nd series banknotes were introduces by BNM to the public with the design focusing on Malaysia culture, building and landmark with $1, $5, $10, $20, $50, $100, $500 and $1000 denominations. The obverse design of the banknotes still maintain the portrait of the first DYMM Yang Di-pertuan Agong. The tiger watermark has been changed with the first DYMM Yang Di-pertuan Agong portrait. In 1995, 20 ringgit banknote were discontinued and ceased to be legal tender. 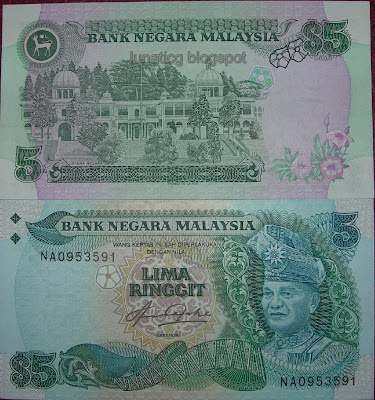 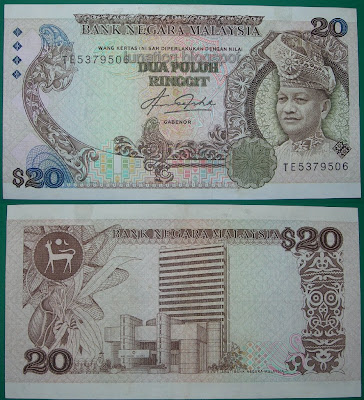 In 1986,Malaysia 5 ringgit banknote have been redesign because of some issue regarding a flag pole with a cross on the reverse design that show old Istana Negara building. The new $5 banknote has been a big issue among Muslim in Malaysia and some of them don't want to carry a money with a cross on them. In 1984, the RM5 banknote has been replaced with almost the same design without a cross flag pole on them. In 1993, $1 notes were discontinued and replaced by the $1 coin.


Malaysia 2nd series coins introduced into circulation on 4 September 1989 with a Malaysian tradition and character design/theme. The coins were designed by Low Yee Kheng and wholly minted by Bank Negara's mint at Shah Alam. Some changes had been done including the inclusion of a Hibiscus rosa-sinensis (Malay: Bunga Raya), the national flower of Malaysia, on the upper half of the observe, and the depiction of items of Malay culture on the reverse. Most Malaysian collector refer this coin as a "Bunga Raya Series". Actually, Bank Negara Malaysia released this as a "Cultural Artifact Series".The denominations issued are 1, 5, 10, 20, 50 sen and 1 ringgit.

On 7 December 2005, the 1 ringgit coin was demonetised and withdrawn from circulation. This was partly due to problems with standardisation (two different versions of the second series coin were minted) and forgery. On November 2007, Bank Negara Malaysia announce that 1 sen coin will start to be discontinued. this is because of the high cost to produce them and with some 4.4 billion minted and 99% have been lost in circulation. 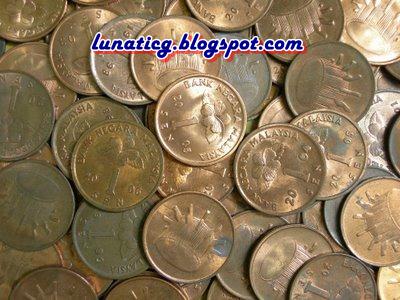 1 sen coin still legal tender but most seller in this country will not except them. A new rounding mechanism introduced with whereby the total bill amount (including goods and services subject to tax) is rounded upwards or downwards to the nearest multiple of 5 sen. In this regard, total bill amount that ends in 1, 2, 6 and 7 sen will be rounded down while 3, 4, 8 and 9 sen will be rounded up to the nearest multiple of 5 sen. 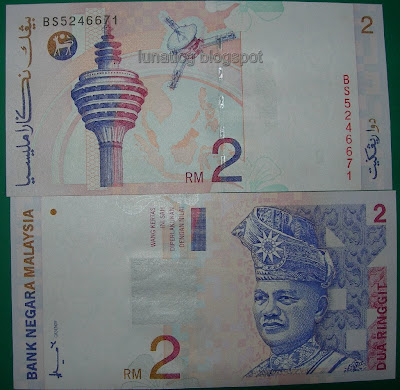 In 1999 the RM500 and RM1000 notes were discontinued and ceased to be legal tender. This was due because of the Asian monetary crisis of 1997 when huge amounts of ringgit were taken out of the country to be traded in these notes. In effect the notes were withdrawn out of circulation and the amount of ringgit taken out of the country in banknotes was limited to RM10,000. On 26 October 2004, Malaysia 1st circulation polymer banknote were introduced with RM5 polymer released.


On 25 July 2011, Bank Negara Malaysia Governor (BNM) Tan Sri Dr Zeti Akhtar Aziz, released Malaysia 3rd series coins. The new series of coins start circulating since 16 January 2012. A special packaging of 500,000 commemorative coin sets are sold to Public for RM10 per set in all BNM branches. The coins were designed by a Malaysian and wholly minted by Bank Negara's mint at Shah Alam. The new 2012 series of coins are legal tender and will co-circulate with the existing series next year. You can still using Malaysia old coins when the new coins start circulating. 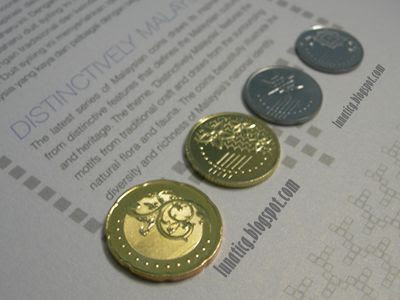 On the obverse, each denomination features a different motif, 14 dots representing the 13 states and the Federal Territory and (with exception in the case of the 50 sen coin) five horizontal lines representing the five principles of the 'Rukun Negara' (national pillars). On the reverse, the new series of coins feature the national flower Rosa-sinensis hibiscus (known as the 'Bunga Raya'), numerals indicating the year of minting, the face value of the coin and the words 'BANK NEGARA MALAYSIA'. 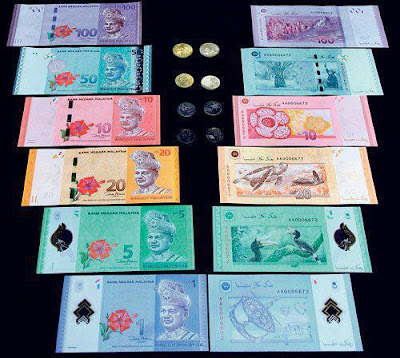 On the obverse side, all banknote denominations in the new series retain the portrait of the first Seri Paduka Baginda Yang di-Pertuan Agong, Tuanku Abdul Rahman ibni Tuanku Muhammad, the national flower Rosa-sinensis hibiscus (known locally as the 'Bunga Raya') and patterns of traditional woven fabric - the 'songket'. For everyone information, Malaysia new banknote will start circulating on 16 July 2012.