lunaticg 5:10:00 AM
Italy 10 euro silver coin issued to mark 70 Years of Peace in Europe has won the 2017 Coin of the Year (COTY) Award. The 10 euro coin also claim the title of Most Artistic Coin in the annual COTY competition. 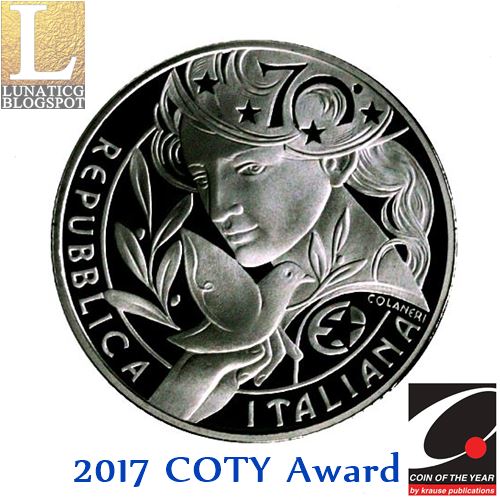 Italy 10 euro - 70 Years of Peace in Europe silver coin reverse show a dove held by a feminine figure with the number “70” standing for the anniversary of peace.


The Italy 10 euro silver coin is issued as part of the 2017 EUROPA Star numismatic Programme. A panel of international judges chooses the coins dated 2015 for the award. It will be given the trophy Feb. 4 at the World Money Fair in Berlin.


Winners of the 2017 COTY 10 categories were announced in the Jan. 3 issue of Numismatic News and the January issue of World Coin News. Trophies for all 10 will also be given Feb. 4.


It was from this field of 10 first-round winners that a second round of judging occurred to determine the Coin of the Year.


Krause Coin of the Year Award has come to symbolize the highest achievement in international numismatic design, artistic vision, and craft smanship.


Created in 1984, the COTY Award has been given by World Coin News to recognize the best of the coiner’s art and to encourage world mints to continue to challenge themselves in creating these great numismatic works.


World Coin News is a monthly periodical dedicated to collecting international coinage and is a sister publication to Numismatic News.