lunaticg 8:47:00 AM
A single RM1000 note which has the same price as a house? Most collector will be dreaming a high return of investment like that. It is real and it is happening last Sunday, a Malaysia 1000 Ringgit 5th Series Replacement note with Super Low Serial number ZZ 0000001, graded PMG 64 EPQ sold for RM322,000 including buyer premium in Trigometric Sdn Bhd Inaugural Auction. 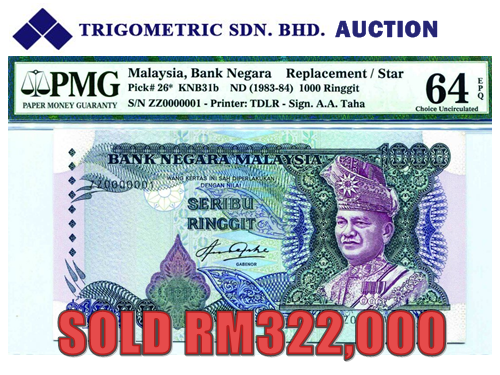 For non collectors who might don't understand why the banknote get a very high price. The banknote is so special to collectors because it is a replacement banknote with a very low number and graded by Paper Money Guaranty (PMG) as 64 EPQ. Collector rarely have the opportunity to witness such note offered in local auction.

Here is a video taken during the auction that create a stir among collectors on the auction day:

Many people are speculating that the bidder who won the 1000 Ringgit is Frank Goon, (please read: Banknotes of British Malaya, The Frank Goon Collection). Trigometric Sdn Bhd has not issued any statement on this matter but we heard rumors that the winning bidder is a famous collector from Hong Kong. He also won several other items during that auction day and we also heard rumors that he pay his wining lot after the auction end and going back to Hong Kong the same day.


For your information, the most expensive Malaysia banknotes sold in auction is a set of complete Malaysia 1st series banknotes (6 pieces) with same serial number A/1 000001, sold for £115,100 four time the original estimate (£20,000-£30,000) in Auction by Spink on 8 October 2007. According to the news, the item won by CIMB Bank of Malaysia and were given as a gift to Bank Negara Malaysia (BNM) but we never saw BNM display the said notes collection in their Museum. The exchange rate during that day is 6.905 Ringgit per Pound. Bringing the total amount paid during that time to RM794,795.


Even so, the auction was a historic event because it still the most expensive banknote ever sold in Malaysia auction so far. Congratulation to the auctioneer and organizer, Trigometric auction team for a very successful auction. Many people are looking forward what you will be offering in your next auction.

We hope, Trigometric can make an official announcement about their auction result.