2014 Coin of the Year Award Winners

lunaticg 11:08:00 PM
Result for 2014 Coin of the Year Award (COTY) Category has been released by Krause Publications on 14th November 2013. The international panel of mint masters, artists and numismatists will start to vote which of the 10 coins will be named the Coin of the Year for 2014. Voting will ends on 8 December 2013. 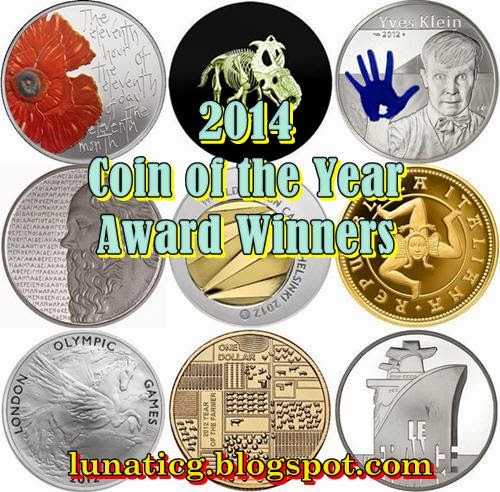 All coins in the competition are dated 2012. Nominations can be made by anyone. A nominating committee met in the offices of World Coin News in Iola, Wis., on Oct. 4. The committee placed 99 coins on the first round COTY ballot. Voting took place by secret electronic ballot in ten categories by an international panel of judges from the 31st October to the 10th November.


The COTY winner, as well as all winners in the 10 categories, will be recognized at a special awards ceremony held on the 8th February 2014, at the World Money Fair in Berlin, Germany.