lunaticg 8:43:00 AM
In the past few weeks, vtraque vnum or pillar dollar coins has been a hot topic between Malaysian numismatic community. It became a hot issue since a newspaper reported that a piece of that coin valued at RM16 million a piece. The coin showed in the newspaper not even an original coin, it is an asian made replica. To make it more interesting, Berita Harian reporter even contact a metal design expert from Universiti Teknologi Mara (UiTM), Prof Dr Marzuki Ibrahim to confirm about their vtraque vnum coin. The article title "Pakar akui syiling Sepanyol 252 tahun asli" printed in local news Berita Harian became a big joke among numismatic community. They're talking about coins but they're asking a metal expert to confirm that coins originality. It is like you're talking about computer but you're asking a carpenter to assemble your new PC. In that article, the expert confirm that the coin that they're talking about in the news is original base on the coin width and weight. Is that the correct way to authenticate an original 252 years old coins? What a joke. 
Luckily, we have our own online expert in numismatic, sifu Dickson Niew. I meet him last Friday and asked his help on enlighten us about the famous vtraque vnum coin. To anyone who don't know him, he is one of a committee members for Malaysia Numismatic Society and in my opinion he is an expert in Malaysia Bunga Raya Parliament coins. He has many resources and other sifu that he can contact to confirm anything about numismatic. When I ask his help to write a post about How to check fake vtraque vnum coin, he don't straightly wrote a post about it. It took him almost a week to write up an article. 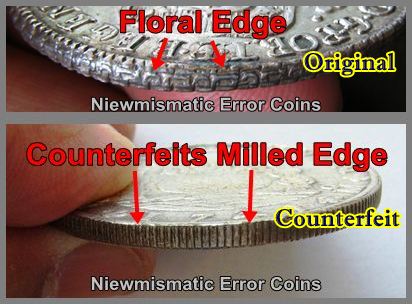 Here is what sifu Dickson Niew posted,
HOW TO DETECT FAKE PILLAR DOLLAR:
You can go to his original & pictures of the coins here; How to detect a counterfeits pillar dollar.

They're also online expert website (allexperts.com) that discuss about how to check genuine vtraque vnum coin. You just go to their website and type "vtraque vnum" in the search button. They're a lot of explanation by their expert about that coin. You can read one by one to understand what fake and genuine coin should be.

Here is one example of their expert view, Dmitry Livshits.
HOW TO CHECK GENUINE PILLAR DOLLAR:

"Typically the most reliable way to tell if you have a genuine coin is to check it against the reference weight. For a coin this size, it should be no less than 27 grams. Unfortunately I can tell you from the picture that this is a modern Asian-made replica. The surface and details are not what they would look like on a 270 year old coin. The biggest thing that gave it away was the 4 leaf rosettes. If you look at the two on the right side of the pillars, the leaves are very close together, while on the left side they are far apart. On genuine coins they took much greater care and you would not see such asymmetry".
You can go to his original post & picture of the coins here; 1739 vtraque vnum.


In my opinion, the best way to authenticate your coin is to bring the actual coin to your nearest coin expert. Either then that you can try email them with a clear obverse, reverse and the coin edge pictures but if you think your coin worth 16 million ringgit, a short trip to Subang Jaya to meet sifu Dickson Niew is only worth around few ringgit, right? We don't need modern "luncai" or "Pak Pandir" who are dreaming about million ringgit that they don't have but talk like an expert in numismatic.