lunaticg 2:45:00 AM
A new €50 World Design Capital Helsinki coin has been released by Mint of Finland during World Money Fair in Berlin. The 50 euros gold and silver coin minted to commemorate Helsinki as a 2012 World Design Capital awarded by International Council of Societies of Industrial Design. Only 5,000 pieces of this coins are minted by the Mint and it came with a beautiful gift package. The collector coin marking this momentous year has been designed by the designer Henna Lamberg. A 5 euro Aluminium-Bronze metal coin with the same design also has been released. 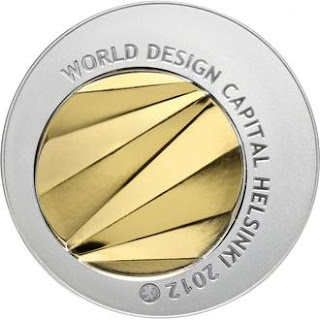 On the obverse show alternative smooth and uneven surfaces including triangular and peaked effects that give it a distinctive look and tactile attributes resulting in a three-dimensional appearance. The text on the coin reads “WORLD DESIGN CAPITAL HELSINKI 2012” and is placed around the inner disc which is off-center. The Mint’s logo appears towards the end of the legend. 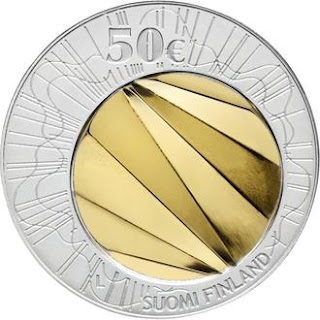 On the reverse show an opposite illustration of the center disc as seen on the obverse and also includes the coin’s denomination positioned at the top along with free-style and directional linear additions all around the center disc which are recessed into the silver ring. The text “SUOMI FINLAND” is also seen towards the lower portion.

If you're interested on buying the coin, you can visit Mint of Finland at www.suomenrahapaja.fi.