lunaticg 9:12:00 AM
Yesterday, European Central Bank release their Biannual information on euro banknote counterfeiting. In the report, only 295,553 counterfeit euro banknotes were withdrawn from circulation for first half of 2011. It is a 18.8% decrease on the quantity recovered in the previous six months. The majority (98%) of counterfeits recovered in the first half of 2011 were found in euro area countries, with only around 1.5% being found in EU Member States outside the euro area and 0.5% being found in other parts of the world. 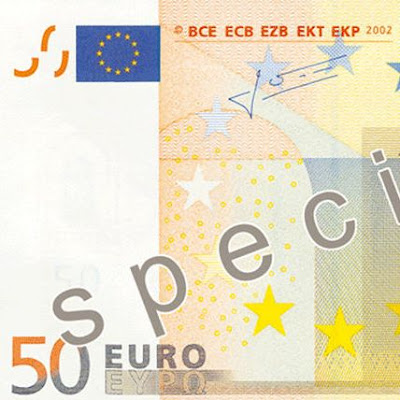 The €20 and €50 denominations continue to be the most counterfeited. During the past six months, the share of counterfeit €20 banknotes increased and the share of €50 banknotes decreased. The two most counterfeited denominations together accounted for 79.0% of the total during the first half of 2011. The €100 banknote is the third most counterfeited denomination, accounting for 16.0% of the total. The share of the other denominations (€5, €10, €200 and €500) is very low.
The European Central Bank (ECB) and the 17 national central banks of the euro area advise the public to remain alert with regard to the banknotes received in cash transactions. Genuine banknotes can be easily recognised using the simple “FEEL-LOOK-TILT” test described on the euro pages of the ECB’s website and the websites of the Eurosystem national central banks. In case of doubt, however, a suspect banknote should be compared directly with one that is known to be genuine. Anyone who suspects that they may have received a counterfeit should contact either the police or (where national practice allows) the relevant national central bank.
Source: European Central Bank (ECB)
Lat year, ECB report an increase of fake euro notes and decrease on fake coins. By the way, when was the last time Bank Negara Malaysia (BNM) ever release their own counterfeit banknote and coin report?