How to spot fake sen

lunaticg 8:28:00 AM
Do you know how to spot fake sen? The sen I am talking about in here is the 50 sen coins. At first, I thought that a fake 50 sen coins are increasing at an alarming rate but I try to make a test with changing 200 ringgit to 50 sen. The result show that Malaysia 50 sen counterfeit coins are not in alarming state. I took the coins from 4 different place/people in Klang; A friend, Bank, Market and my own collection. This is to make sure that I get those coins from various places. From 400 pieces of the 50 sen coins, I can only found two fake.

Why I am doing this test? Because of the old news about the fake 50 sen coins that say counterfeit 50 cents are in alarming rate. In my opinion, that most probably because they don't collect their 50 cents at random from other different places. People in the news received the fakes from their buyer. That's mean they only station in one place. I also heard many story about counterfeiting factory in Malaysia but I never read in newspaper that factory is busted by the authority.

I am also chatting with some of my regular reader about this matters, some agree that this 50 sen fake is in alarming state. While most people don't know anything about it since they don't collect fake. Maybe my test is not that accurate since I am checking those coins alone but this is what I found out from the test. I am only focusing on 50 sen since it will be expensive to fake other denomination and it will not be worth it and this is the highest Malaysia denomination coin at the moment. You need to compare your coin between the suspected fake and original.
How to spot or detect fake 50 sen. 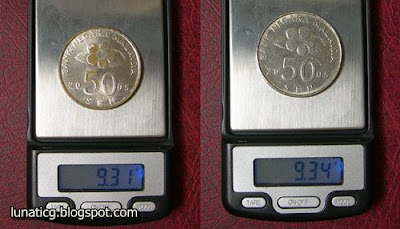 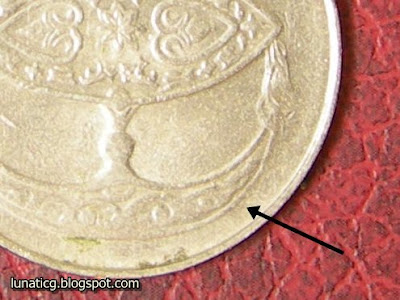 Details of the coins are not the same as the original and it will be blur under 10x magnifying glass. Some of the details are missing too, even if its in lustre and shiny condition. 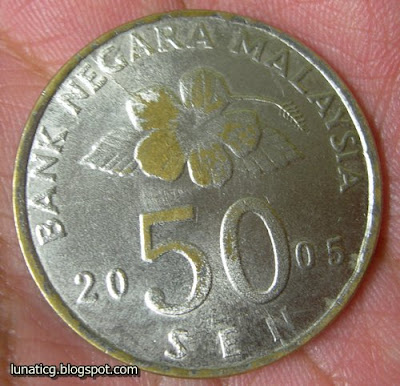 The easiest way to detect the fake from the original is that it is plated. The coins appear to be shiny or look like it had been polished. Try to peel of the outer layer. If you can peel it of and the color of the inner layer is totally different (dark in colour etc), that is fake.
The wording on the obverse (BANK NEGARA MALAYSIA), might not properly struck. That mean the words might be appear a little bit blur or not as sharp as what we can see on the original. This is because of weak struck or worn die.
Lettered edge for $1 London Mint.
Don't look at the lettered edge because all the original do have different lettered edge. It will not look the same even for the same year.
The fake always come with rotated die error. the degree of rotation is vary from 5 to 180 degrees. Thats mean the design on the obverse and reverse rotated a little bit.
Those 50 sen planchets that can attracted to magnet are considered as rare pieces. Not easy to find one nowadays. Mostly are recycle brass planchets plated with tin. It was rejected by parking machine due to its lighter in weight and sometimes can be attracted to magnet.
Source: Dickson.