lunaticg 8:35:00 AM
Chinese archeologists announced Wednesday the discovery of the most complete Western Han Dynasty (206 B.C.- 25 A.D.) cemetery. More than 10 tonnes of Wuzhu bronze coins together with more than 10,000 other gold, bronze and iron items, unearthed along with jade articles, wood tablets and bamboo slips, said Xin Lixiang of the China National Museum, who heads the team at the site. 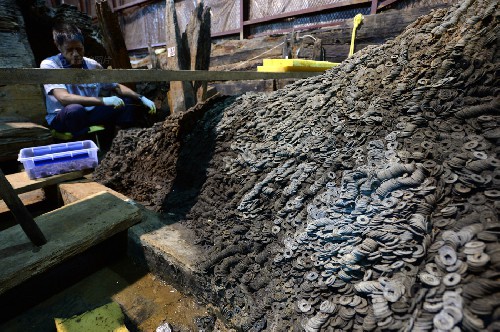 The Haihunhou cemetery is located a kilometer from the nearest village in Nanchang, capital of east China's Jiangxi Province. It covers some 40,000 square meters with eight tombs and a chariot burial site with walls that stretch for almost 900 meters.


Archeologists suspect that the main tomb is that of Liu He, grandson of Emperor Wu, the greatest ruler of Han Dynasty, one of the most prosperous periods in China's history. Liu was given the title "Haihunhou" (Marquis of Haihun) after he was deposed as emperor after only 27 days, dethroned by the royal clan because of his lack of talent and morals. Haihun is the ancient name of a very small kingdom in the north of Jiangxi.


Xu Changqing, director of Jiangxi provincial cultural relics research institute, said on Wednesday that the cemetery is the most complete and best preserved Han Dynasty tomb cluster ever discovered. Archeologists can clearly see the foundations of the tombs thought to be of Haihunhou and his wife, as well as affiliated memorial temples. There are roads and drainage systems in the cemetery.


The Wuzhu bronze coins were unearthed in the most complete Western Han Dynasty (206 B.C.- 25 A.D.) cemetery ever discovered in China.


The bronze coins together with more than 10,000 other gold, bronze and iron items, have been unearthed along with jade articles, wood tablets and bamboo slips.


The work of Li and his colleagues in counting, clearing and photographing the coin has led to the first clear understanding of the Han Dynasty monetary system. 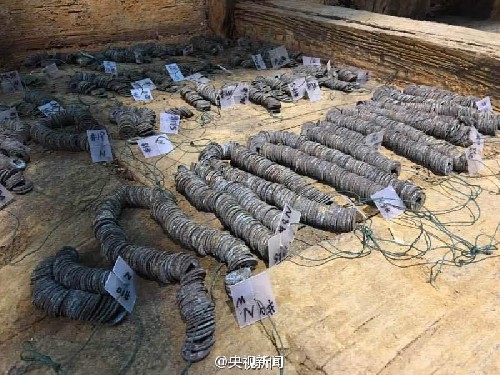 The coins were arranged in group of 1,000, with each set strung on a cord.


Before the finding, historical documents had suggested that a string of 1,000 coins was a monetary unit, which was thought to have originated in the Tang Dynasty (618-907). This is the first hard archeological evidence of the monetary unit, and has pushed the date back 600 years.


Xin Lixiang said that according to documents, 10 such strings of bronze coins could be exchanged for 250 grams (or one "Jin" in Chinese) of gold. Ten "Jin" of gold was usually the total property of a middle-class family at that time.

Li and his colleagues have found six complete strings of bronze coins at the dig.


"The coins are strung on hemp ropes. Although the ropes had weathered, we were able to identify the strings," said Li. 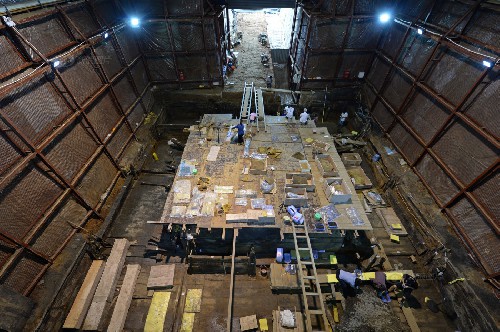 He said to prevent the piles of coins from collapsing, they had to work on the hanging board. The coins came from the reigns of three emperors including the Emperor Wu, considered the greatest ruler of Han Dynasty, and Emperor Zhao and Emperor Xuan in the Western Han Dynasty.


Each round coin has a square hole in the center and is carved with the characters of Wuzhu in seal style font. Wuzhu (five grains) refers to the weight of the coin.


Xin, who has studied some 4,000 Han Dynasty tombs, said the amount buried indicated the importance of the occupant of the tomb. The focus of the next stage of the archeological work will be to look for items locked in the coffin of the central mausoleum.


"There may be a royal seal and jade clothes that will suggest the status and identity of the tomb's occupant," he said.


Li Xiaojie, vice minister of culture and director of the State Bureau of Cultural Relics, has ordered that work of the cemetery should be aimed at applying for UNESCO's world heritage listing.


Jiangxi's cultural department use high-tech sampling and recording to document information and data. Several labs and research teams have been set up to work separately on archaeobotany, zooarchaeology as well as studies on textiles, metals and historical records.