lunaticg 7:10:00 AM
On 8th May 2014, an Edward VIII 1937 Gold Proof Sovereign sold for £516,000 (US$870,027), a new record for the most expensive Britain coin sold in auction. The coin is part of The Hemisphere Collection of Gold Sovereigns at A.H. Baldwin & Sons Ltd, the first complete monarchical collection of gold Sovereigns ever to be offered at auction. 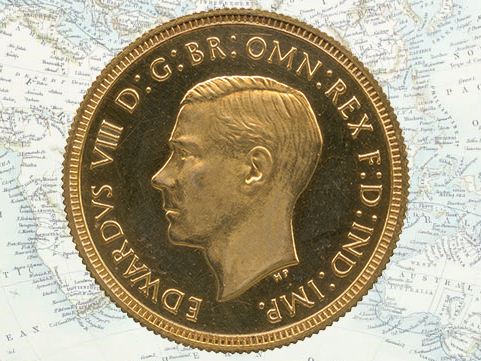 
The King Edward VIII, Gold Proof Sovereign, dated 1937, was the only single example available to collectors anywhere in the world. Never produced for currency use, due to the controversial abdication of King Edward VIII, just 326 days after his accession, the coin originally formed part of a proof set of proposed coinage, the designs of which would have been minted and put into circulation after the King's coronation in 1937.

After the death of Edward's father, King George V, in January 1936, Edward ascended the throne and proposals for his coinage were produced. Controversially he refused to follow the coinage traditions of facing in the opposite direction to his predecessor and insisted on using his left facing profile that he preferred. The tradition was started with King Charles II who wished to face the opposite way to Oliver Cromwell, and had been followed ever since until Edward.


This is only the third time this example has appeared at public auction, and the first time it has been seen for sale in the UK since its first auction outing in 1984 when it achieved £40,000 (hammer). Today a tense battle between bidders in the room saw this exceptional coin finally settle at £516,000, it sold to an anonymous buyer in the room. [Lot 2079]

Steve Hill, Director of British Coins at Baldwin's said: "It has been a pleasure to be involved with partly forming, completely cataloguing and today selling this monumental collection. For the first time The Hemisphere Collection brought together Sovereigns from every Monarch from the first Sovereign struck under the reign of Henry VII to those of our current Monarch, Elizabeth II. The Edward VIII gold proof sovereign that sold today, for a record breaking price, was a fitting celebration of the iconic British denomination, both the owner who formed the collection and Baldwin's are thrilled with the result.


The Hemisphere Collection was part of Baldwin's three day May auction calendar which included The Arielle Collection Part Two, The Åke Lindén Collection of European Coins and Indian Coins from the collections of Dr Paul Stevens and Åke Lindén. The catalogue and results can be found online at www.baldwin.co.uk