lunaticg 10:55:00 PM
A butterfly wings might be a way to fight banknote forgery. Expert at University of Cambridge have made realistic imitation copies of the butterfly’s wings after studying the Indonesian Peacock Swallowtail butterfly. Brightly coloured patterns on the insects can now be reproduced on banknotes and passports to minimise the risk posed by fraudsters. Mimicking these iridescent patterns has long eluded scientists as they are produced by light bouncing off microscopic structures in the insects’ wings. The study is published in Nature Nanotechnology journal. 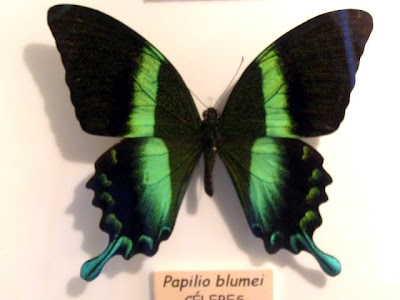 Photo by wikipedia: The butterfly in the study; Indonesian Peacock Swallowtail butterfly.
The butterfly in the study; Papilio blumei is found only on the island of Sulawesi in Indonesia and has a wingspan of three to three-and-a-half inches. The wings of the Swallowtail have an intricate, microscopic make up resembling the structure of an egg carton. It is due to their shape and the alternate layers of air and cuticle within the wings that they produce such depth and intensity of colour. But scientists found a way to produce structurally identical replicas of butterfly scales. The copies are created in the lab from a combination of nanofabrication procedures including self-assembly and atomic layer deposition.

Mathias Kolle, who led the research, said: “We have unlocked one of nature’s secrets and combined this knowledge with state-of-the-art nanofabrication to mimic the intricate optical designs found in nature.

“Although nature is better at self-assembly than we are, we have the advantage that we can use a wider variety of artificial, custom-made materials to optimise our optical structures.

“These artificial structures could be used to encrypt information in optical signatures on banknotes or other valuable items to protect them against forgery.

Next time when we hold a banknote in our hand, please remember to say thank you for butterfly as well. They help us stop counterfeit banknote from circulating. As in Malaysia, many counterfeit new RM50 counterfeit cases emerging everyday. Just make sure you check your money before put them in your wallet.
Source: Telegraph.co.uk, Wikipedia.