The 1968 Milled edge 50 sen is a collection of Mr. Wong Hon Sum graded MS66 by NGC. I am a little bit shock when I received an email asking me to confirm the news from a friend. When I login to Facebook, I saw Mr. Dickson Niew a blogger at www.fakesilvercoin announce the realized price for top Malaysian coins in that auction.


To all newbies, the coin is not a normal 50 sen security edge (50 sen berparit) but an freak coin with a milled edge. Officially, the coins for 1967-1969 are supposed to be in security edge but there are some coins minted with a Milled Edge. 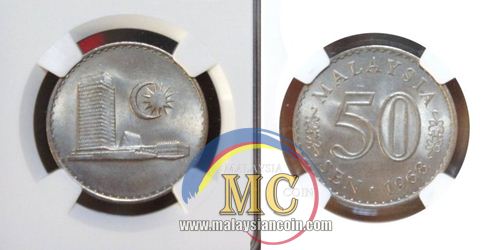 Searching for more information about the 50 sen Milled edge at the NGC Malaysia coin census, confirm that the coin is the best grade so far (the only one with MS66) for Milled edge 50 sen 1968.


I am not sure who is the winner but I sure the news will make my phone and most Malaysian coin dealers phone will be ringing 24/7 for a few months to come. I am sure newbies who heard this news will be contacting any coin dealers and collectors phone number/email/Facebook that they can find and asked us to buy their Very Fine 50 sen 1967, 1968 and 1969 for over RM10K. I already shared what I knew in this article; information about Malaysia 50 sen 1967, 1968 & 1969. Please read them carefully and understand what is Milled Edge and Security Edge before you jump into conclusion that your coin price can get over RM10K.

Other coins that worth to mention in the auction is a 1 sen 1976 Bronze PCGS MS 64 RB with a realized price SGD4,720 (including buyer premium), RM12,210. The coin also broke the previous record for Malaysia 1 sen 1976 bronze of RM7,550 sold in Monetarium Singapore auction on 27 Mac 2013. The normal coin 1 sen 1976 is made of copper clad steel. These 1 sen 1976 bronze is actually a copper coin, a wrong metal error made in the mint. To anyone who want to know how you can check the coin with magnet test, you can read it in my article; How to detect 1 sen 1976 Bronze. 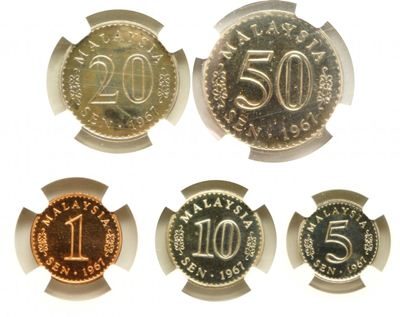 I will share with you more update about the CAA Auction 3/2014 later.